One of the reasons why The Big Raise won our favours is that it’s a short bike ride from the nearest railway station at La Ferté Bernard. The trip from our flat in Paris to the farm by train and bike is three hours door to door.

Sometimes, however, we rent Europe’s top-selling electric car, a Renault Zoe, which has a range of over 300km. It only costs €71 to rent a Zoe from Friday 2pm to Monday midday. Travelling to the farm by Zoe takes two hours, assuming we don’t drain the battery by driving too fast or using the air conditioning! 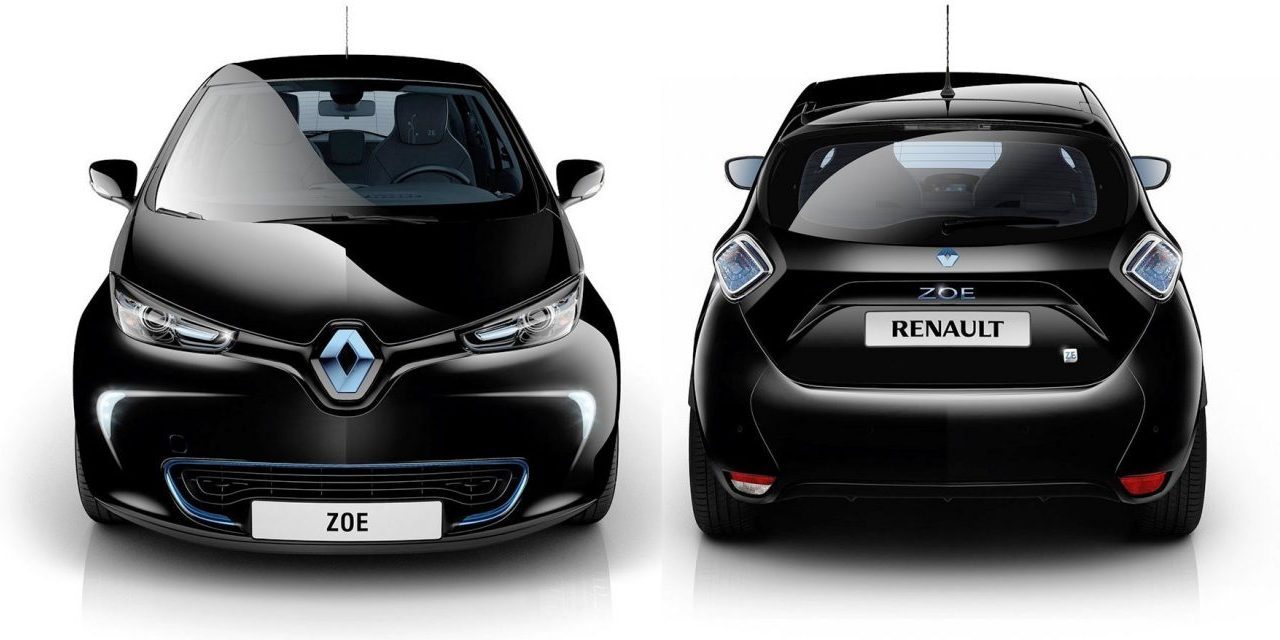 Our first arrival at the farm was a scene from a Feydeau farce. When we tried to open the main gate, we discovered we didn’t have a key to the padlock! We ended up climbing over the gate with a carload of stuff and hoofing everything 250m along the drive to the house again and again and again. You could almost hear our new neighbours, Louis and Madeleine Bonhomme, saying to each other: “Ah, ze crazee Parisians/Inglish ‘ave arrived!”

Yet when Alexis went to knock on their door a few days later, the welcome was fulsome. They seem delighted to have us as new neighbours. Rebel, their German shepherd dog, is particularly happy as she spends most of her time in a large cage but when Alexis comes to visit she gets tickles galore.

Louis offered to help us to buy a tractor-mower, one of our early concessions to the fossil fuel world as a way of keeping some sort of control over the land we’re not yet ready to use. (We’re maybe five years too early for an affordable electric tractor-mower.) We spent a hilarious morning visiting agricultural machinery showrooms, which started with us comparing the relative beauty of red mowers versus yellow mowers, and ended with us becoming relative experts in blade sizes, engine power and the virtues, or not, of mulching accessories.

Louis was ecstatic. “There’s so much work to be done on your farm,” he kept saying, clearly unaware that in our brave new permaculture world work was a thing of the peasant past. A few days later he was shocked to hear that Alexis had purchased a fabulous new Austrian scythe (for cutting the grass and the nettles when we’re not pressed for time) and it became clear that we were destined to have very different view of how to handle the land.

The differences were laid bare when Louis took Alexis on a tour of his garden, which was either dust or serried ranks of annual vegetables. In permaculture, it’s critical to cover the earth at all times and annuals are seen as far more effort than perennials. But that’s not Louis’s world.

We have a different approach to animals too. Alexis is vegan, Blanche is vegetarian and we’re both big animal lovers who are upset by caged creatures. Louis also loves animals but they’re for his pleasure – either for the eggs (his hens and geese), or because he likes to hear them sing (his peacocks, pigeons and other caged birds), or as a guard dog (Rebel). 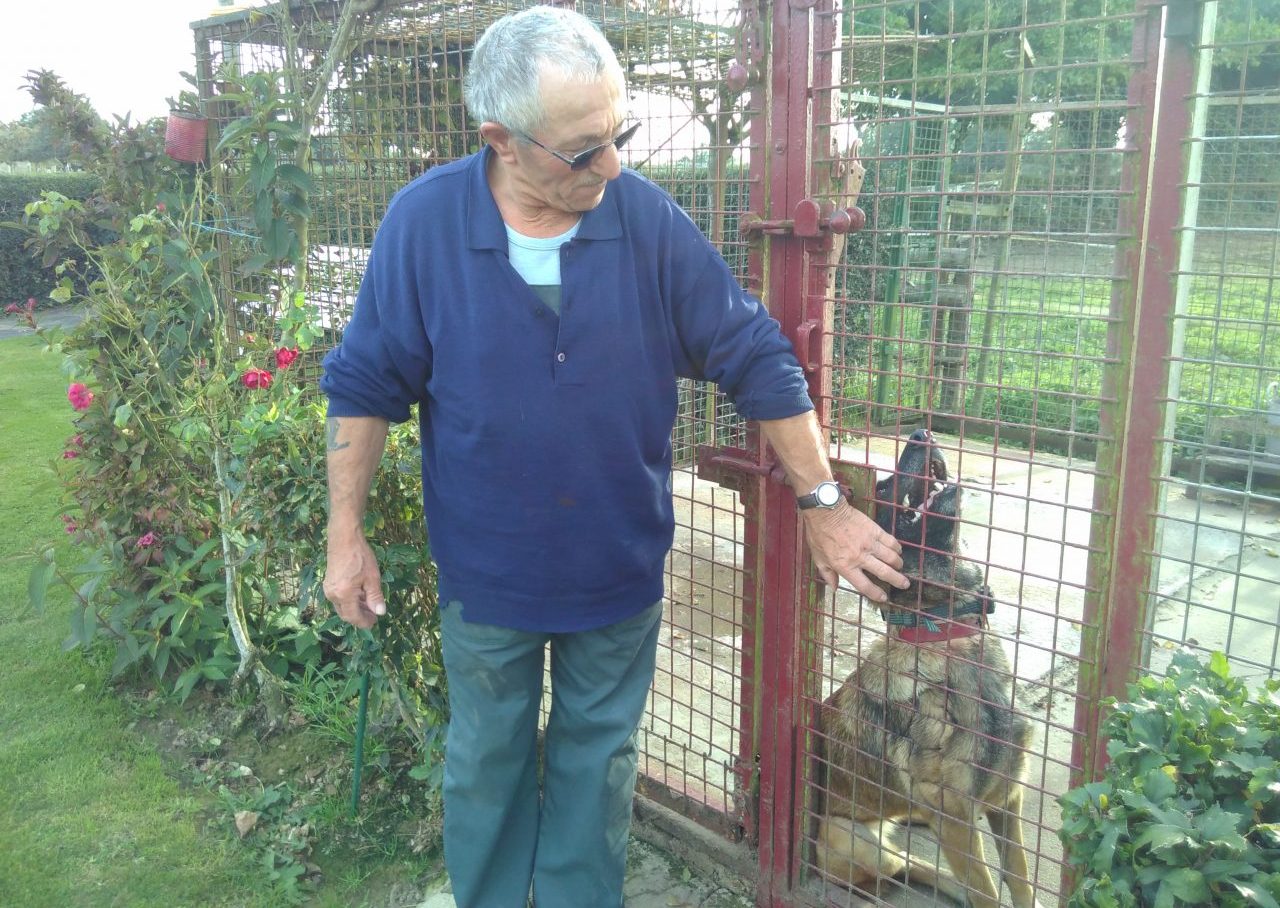 Our neighbour, Louis Bonhomme, and his dog, Rebelle

It will be fascinating in the coming months and years to watch our progress and Louis’s reaction. But we’re not at totally opposite extremes. He’s clear that humans have made huge mistakes with nature: he regrets the loss of mature trees and hedges in the area as farmers have sought to make bigger fields; and he knows that the land has been badly damaged by pouring chemical fertilisers, herbicides and pesticides into it.

Anyway, the main thing is that he and Madeleine, and their four children and 20 grandchildren (all of whom seem to come home to use the washing machine!), are friendly and helpful. If a package arrives and we’re not in, they’ll sign for it. If we have a question, they know the answer or they know someone who knows the answer. 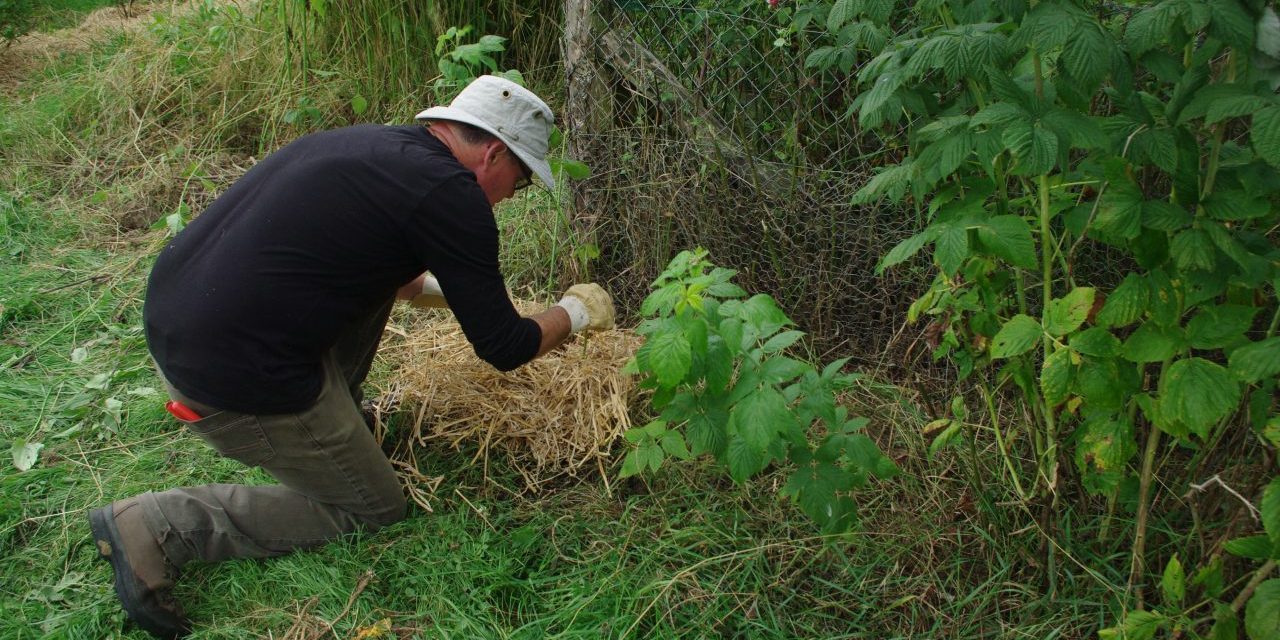 We’ve given ourselves five years to create an edible landscape on our 15 acres. But in the meantime, lots of the land will remain a hay field. And Laurent, a jovial mountain of a farmer, whose family used to own The Big Raise, is the man who will cut our field and cart off the hay for his cows. In return, he’ll give us fuel for our wood burner, which seems like a good deal since we definitely don’t have enough trees on our land to be able to feed a fire all winter. Well, not without losing the existing trees, which is obviously not the goal.

“The field will look much better when it’s cut,” said Laurent, the day he came round to mow. “Oh, but I like the nettles,” said Alexis, “I make soup and pesto out of them, and they’re a great cure for hayfever.” The next day Alexis went to admire Laurent’s mowing skills, and to marvel at the size of Laurent’s tractor, when he noticed a very large patch of untouched nettles. “How come you didn’t cut those nettles down,” he asked. “Oh, I thought you’d want them for your soup,” said Laurent! 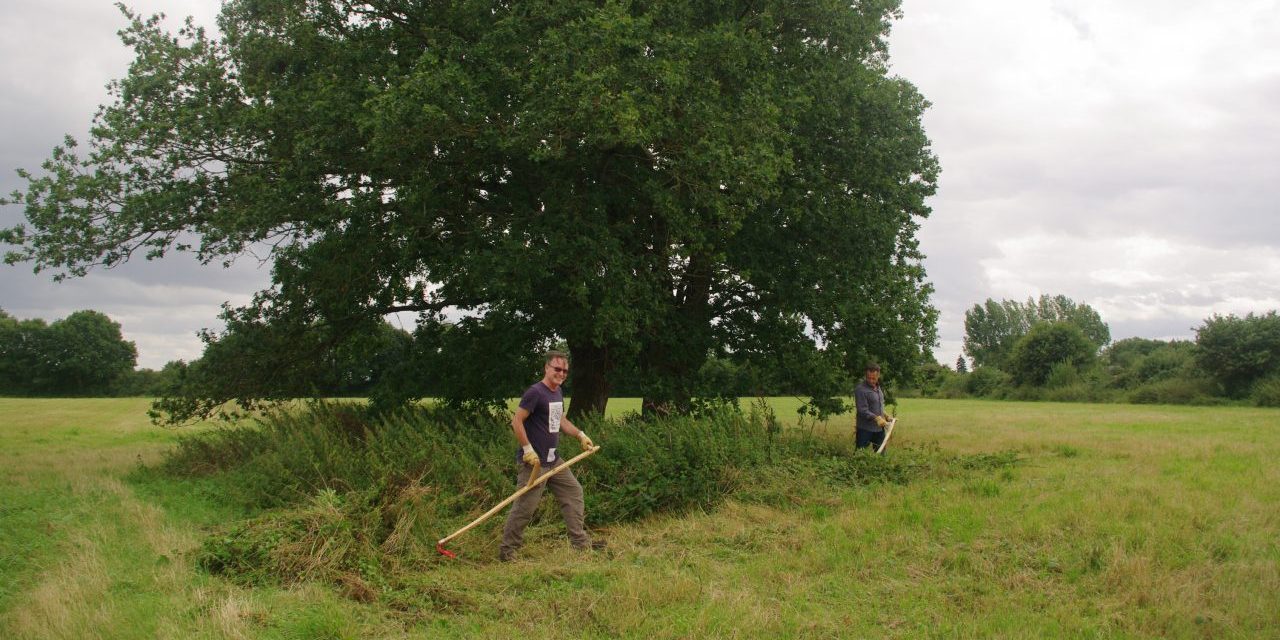 Clearing the nettles that Laurent left behind for soup

2021 : building a greenhouse, restoring the well, expanding the forest garden, spreading the poo!