It’s been the wettest winter for more than 50 years at the Big Raise and it was particularly cold in February and March, so we didn’t manage to do as much in the garden as we’d have liked. Actually, if truth be told, there’s so much to do we’re feeling a bit overwhelmed. But there’s bound to be a relevant Chinese expression about reaching your destination by putting one foot in front of the other so that’s what we’re going to do! 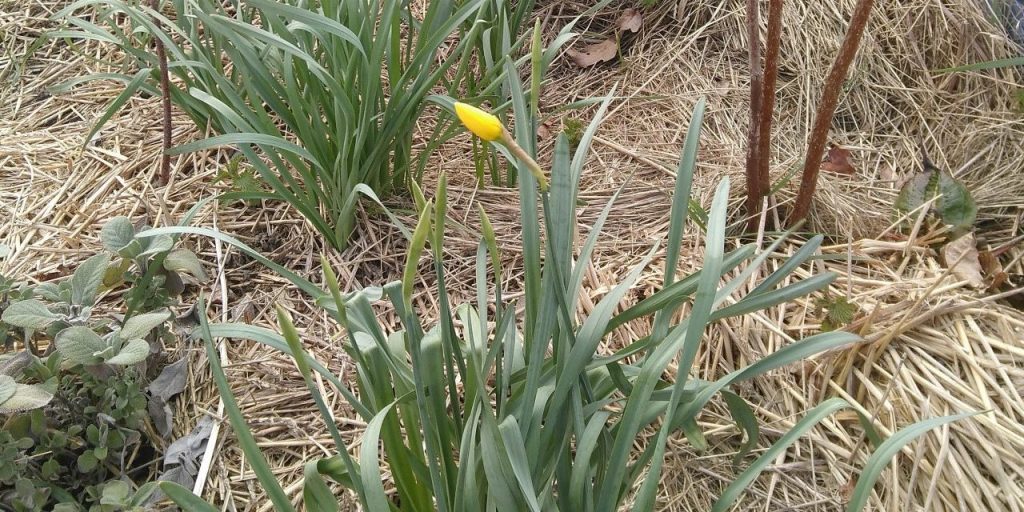 The first daffodil of spring

If you’re going to plant fruit and nut trees, then it’s important to protect them from the prevailing winds. The dominant wind is from the south-west. The main road is that way as well, so you can also hear the traffic. 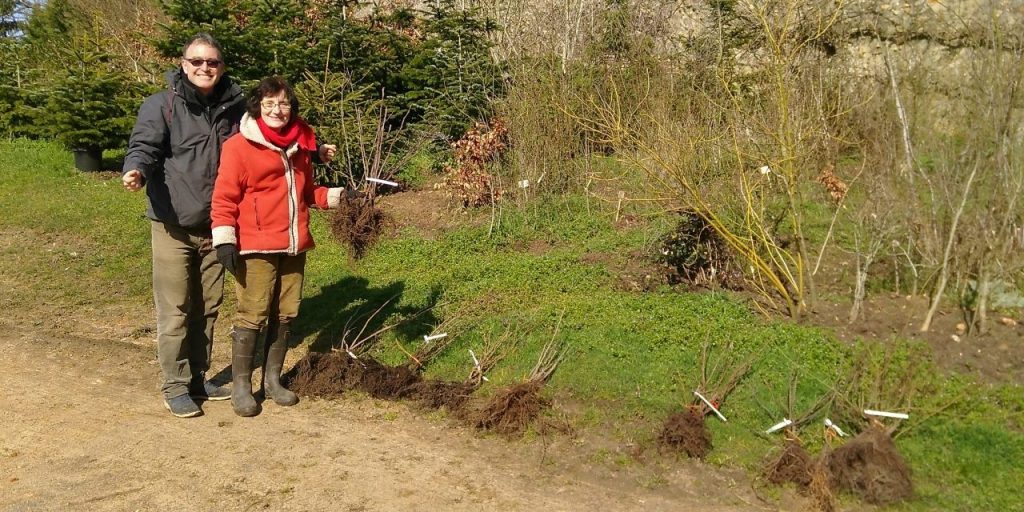 Alexis with Christina, the owner of the local tree nursery

It takes two people an afternoon to clear the brambles (using my new electric chainsaw!), dig holes, plant 20 trees, water them and add manured straw to the surface. So, five afternoons to plant the 100 trees we bought. And five years until they really start generating a benefit! 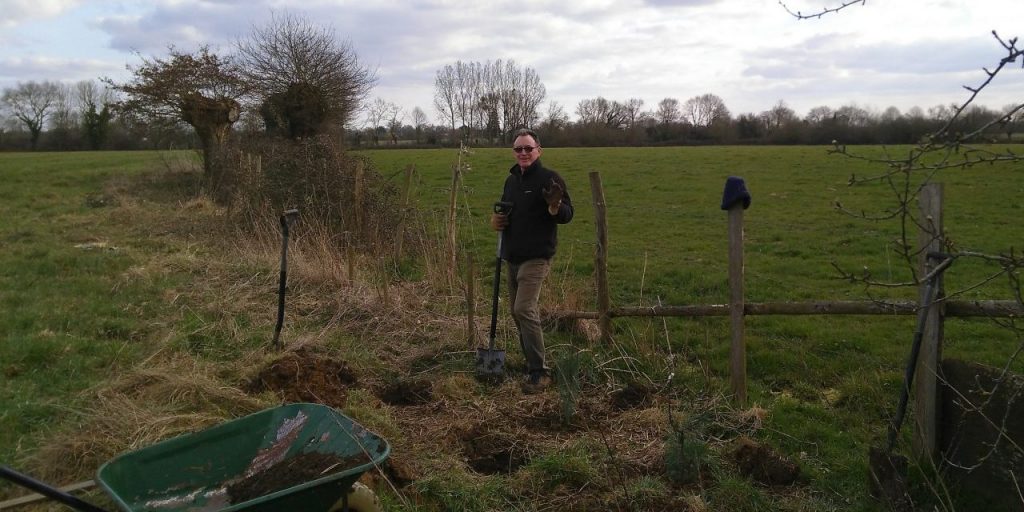 Steve had already tried to replant this hedge a few years ago, but the brambles took over. When we started cutting them back, we discovered that, happily, some of his trees had survived. Also, most of the oaks we thought Steve had killed have started to regrow. Nature is so resilient! 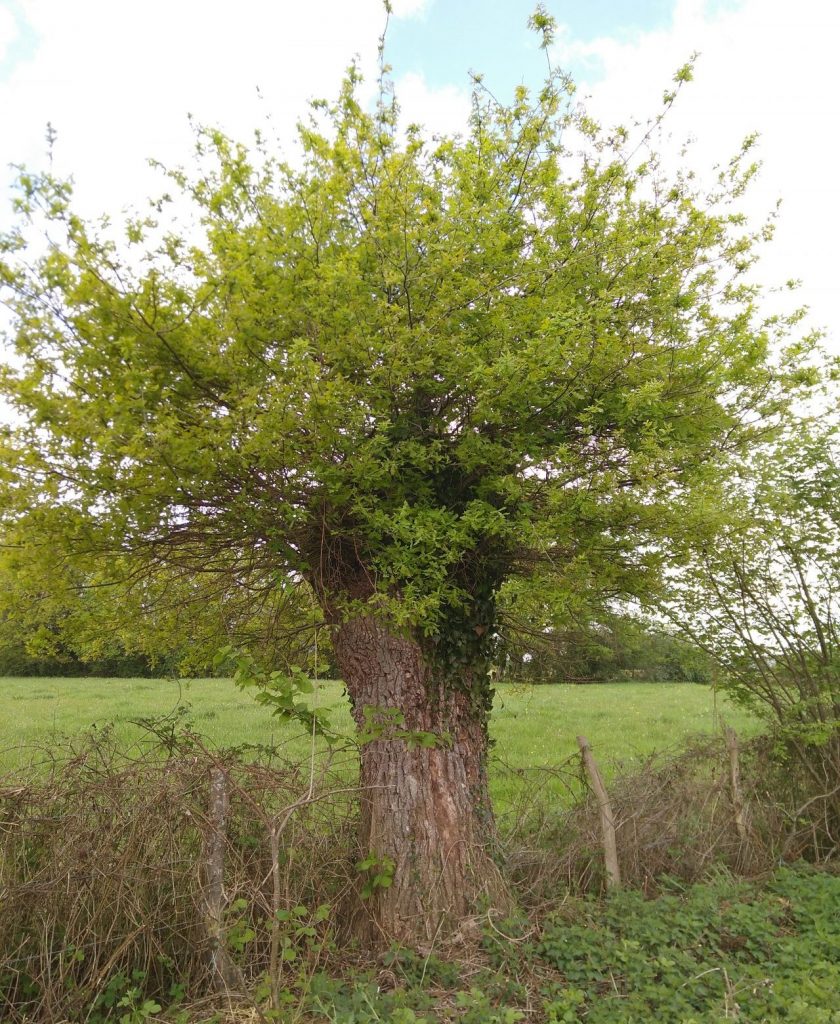 An overpruned oak springs back to life

Cuttings from our existing fruit bushes have been planted into our new nursery on the south-facing side of the house where they’ll get the most sun. The straw is critical for keeping them warm at night during April and thereafter for keeping moisture in the soil. 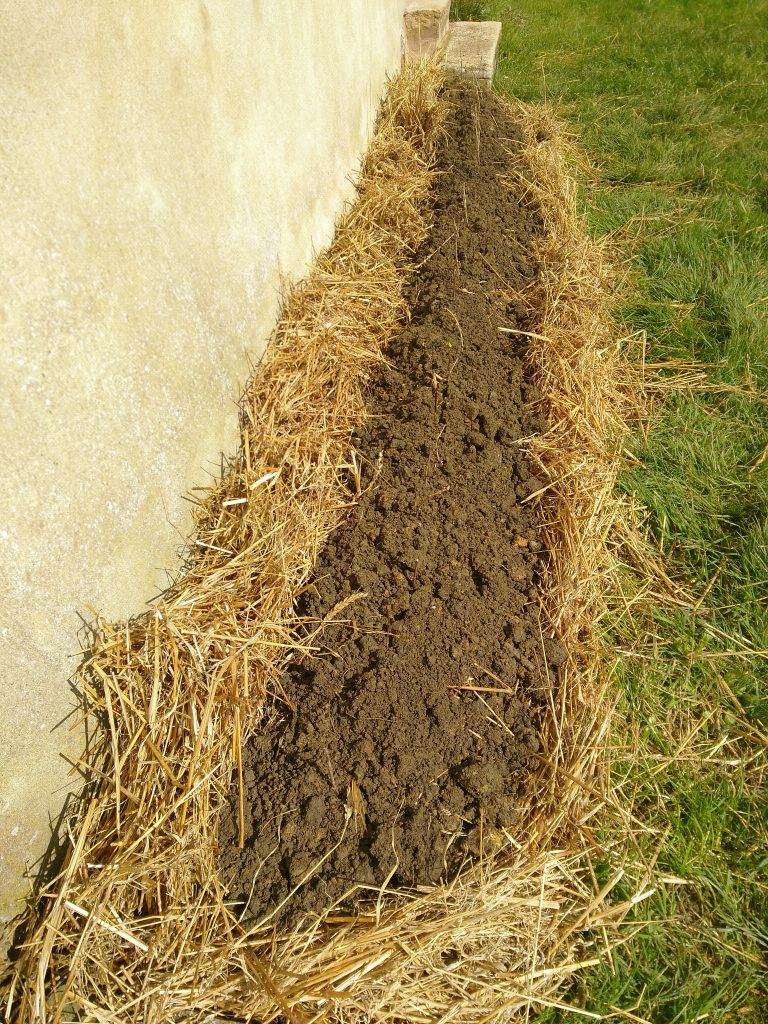 Preparing to put fruit bush cuttings into our nursery

Last autumn Alexis took loads of exciting cuttings (goji berries, yellow raspberries etc) from fruit bushes at the Bec Hellouin Permaculture Farm and put them in the fridge for the winter. Unfortunately, he left them in the plastic bags he used to transport them and so they all rotted away! Some things you simply have to learn the hard way! 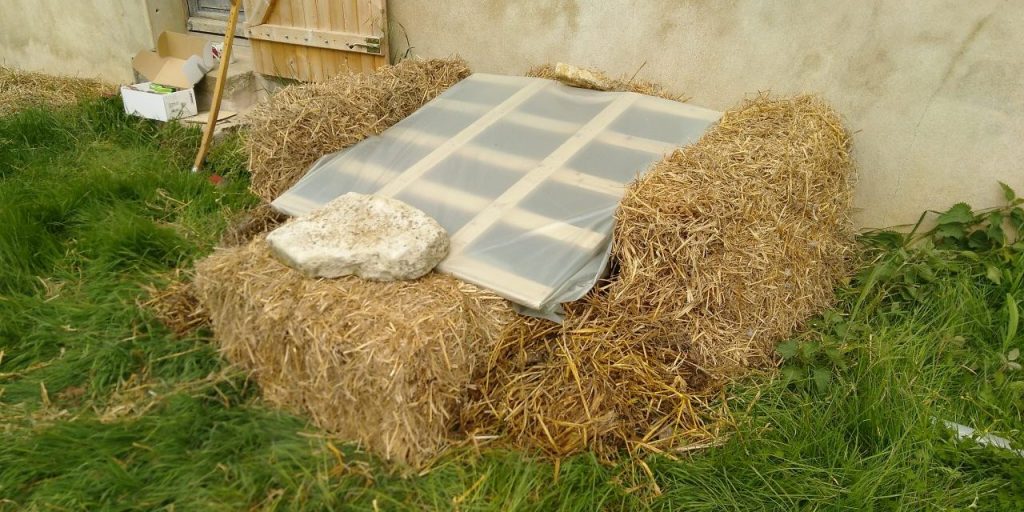 We also made a mini-greenhouse out of straw bales, some wooden packaging that our kitchen units came in and a bit of plastic sheeting. 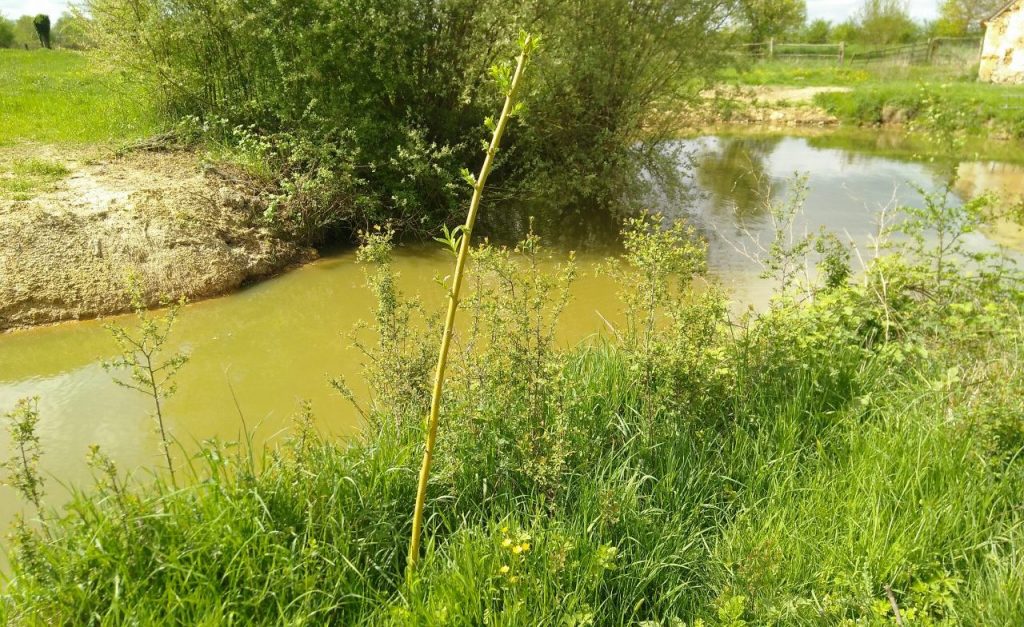 A young weeping willow planted by the canal

We’ve planted a line of weeping willows along the north bank of the canal. It’s easy – you just plant a 1m50 branch and boom, it becomes a tree. They will help to stabilise the bank. We want to sculpt the south bank a bit, to break up the straight lines, so we’re not planting anything there yet. Mind you, our three water rats are doing some of the work for me – they’re breaking up the bank with their games. 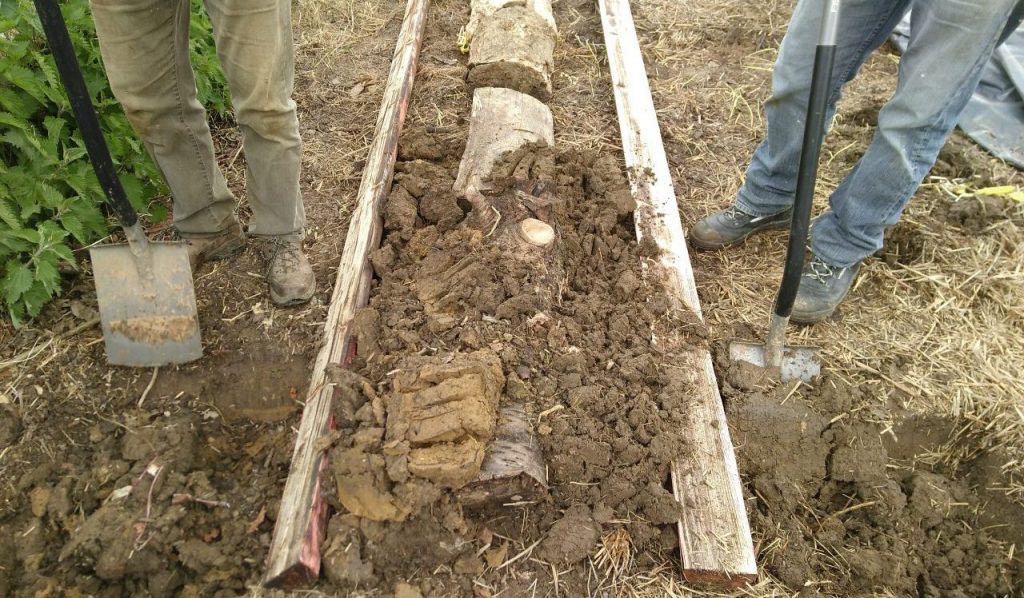 But the piece de resistance has to be our first Hügelkultur raised bed in our vegetable garden which has been covered with black plastic sheeting for the last six months to control the weeds. Hügelkultur comes from German and means a raised bed containing logs, branches, or even whole trees, which are supposed to provide fertility for future years as they rot down. Some say it’s best to dig a trench and then bury the wood in it, but life is short, so we simply laid our logs in a line and covered them with topsoil from the paths alongside the Hügelkultur. 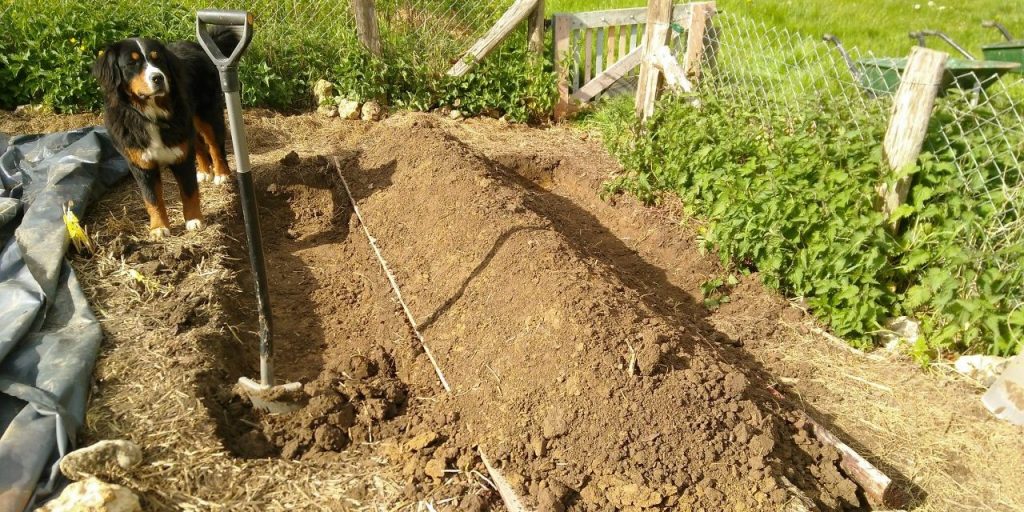 All that remains is for Mao to cover it with straw and plant beans!

It takes one person an hour to do two metres of Hügelkultur like this. It’s really important to cover it with straw to protect the soil from the elements and retain moisture. We’ll plant beans into it next weekend when it’s had a chance to settle a bit. The real beauty of this system is that we should never have to work the earth in this bed again. 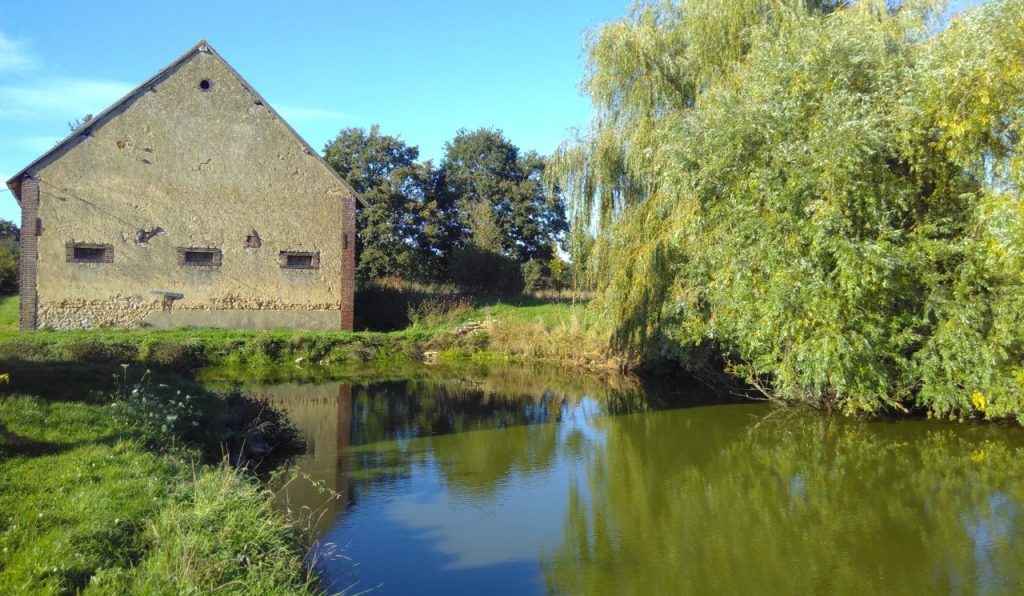 Before we dredged it, the pond had no plants in it because there was so much mud

You may remember that we cleaned out the pond last autumn. So now we need to add oxygenating plants to improve the water quality. So, dressed in my fetching new waders, I raided our neighbours’ pond for irises which will filter the water. 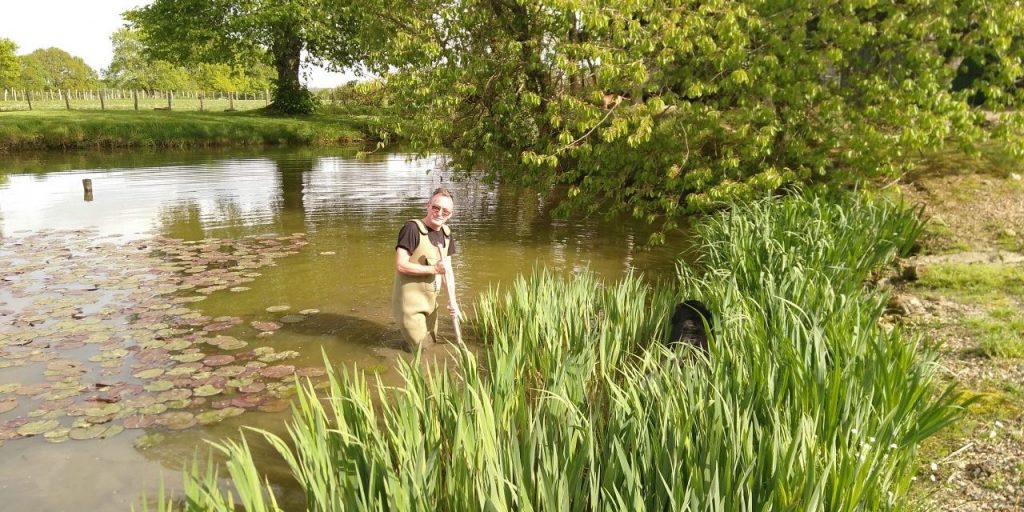 Scrumping for irises in the neighbours’ pond

Before we planted the irises in our pond, we tested the quality of the water. The two key measures we were interested in were nitrates and coliform bacteria.

A high level of nitrates would indicate that chemical fertilisers are leaking into our water table from surrounding farms. The fields around us are populated by organic cows so they’re not the risk, but a bit further away the farmers are using chemical fertilisers, pesticides and herbicides to grow a variety of crops.

Coliform bacteria can be found in the aquatic environment, in soil and on vegetation; they are universally present in large numbers in mammal poo. While coliforms themselves are not normally causes of serious illness, they are easy to culture, and their presence is used to indicate that other pathogenic organisms of faecal origin may be present. Such pathogens include disease-causing bacteria, viruses, or protozoa and many multicellular parasites. 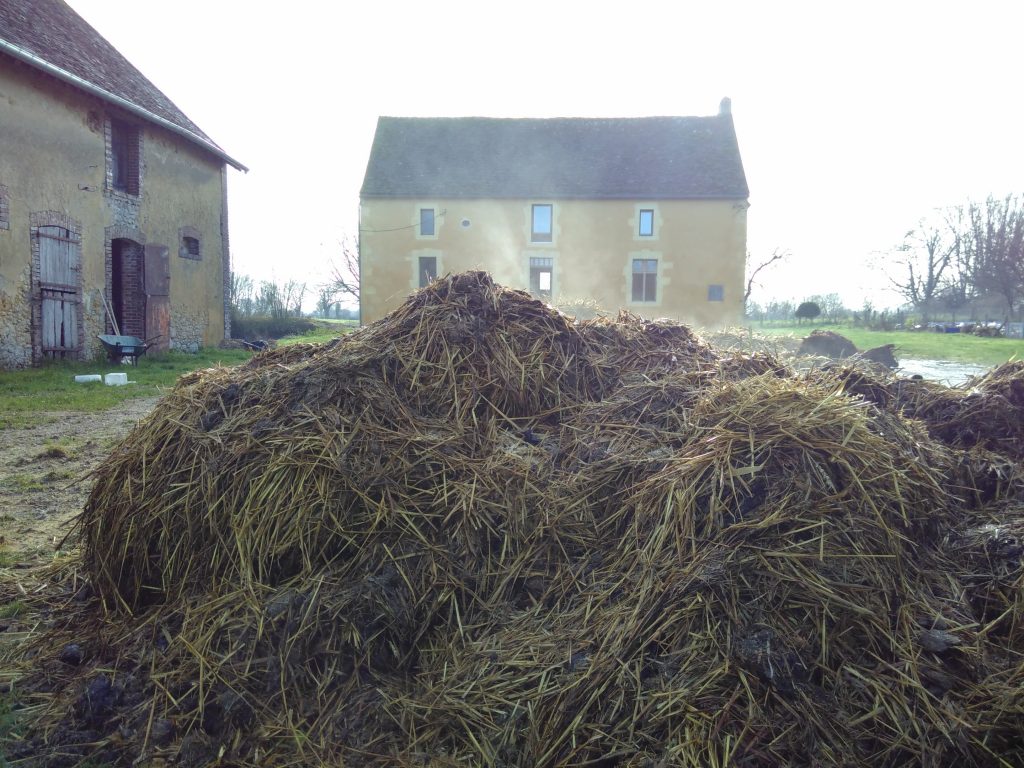 Manure + rain = a brown liquid heading for the pond

We were (over-) worried about liquid from the huge pile of horse manure in front of the house leaking into the pond. Or the doings of our three water rats. Or the urine of the ex-owner, Steve, who we caught pissing into the pond the other day!

[Table: Analysis of the quality of our pond water]

Thankfully, as you can see from the above table, we found nothing untoward. The water quality of our pond is excellent. The irises could therefore go in… 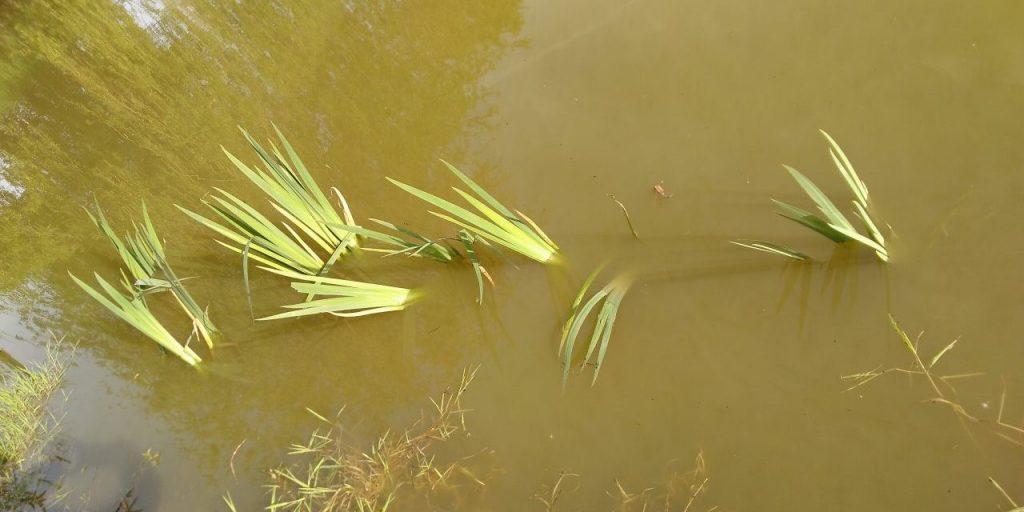 …and we could enjoy our first swim! 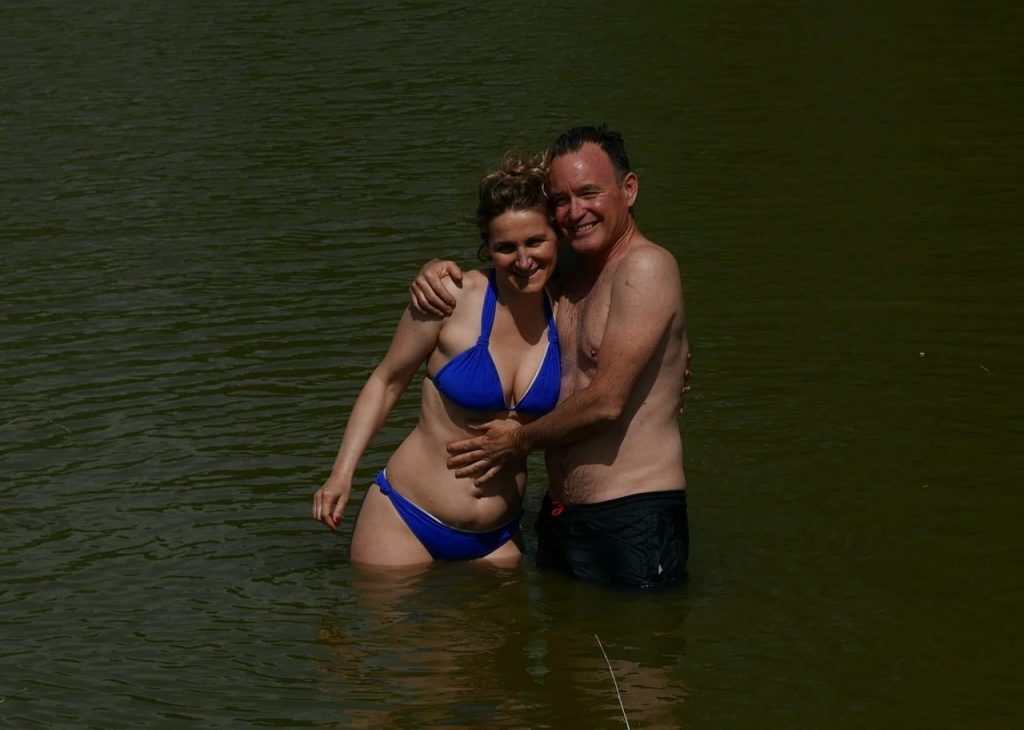