In 2016, we – Alexis and Blanche – decided to look for a house in the Perche, a regional park between Chartres and Le Mans. It’s two hours west of Paris, where Blanche has spent 99% of her life, and halfway to St Malo in Brittany, where she was born. Another way to look at it would be that it’s two hours south of Caen, the channel port that leads to Portsmouth and thence to Alexis’s roots in Hampshire, Surrey and London. 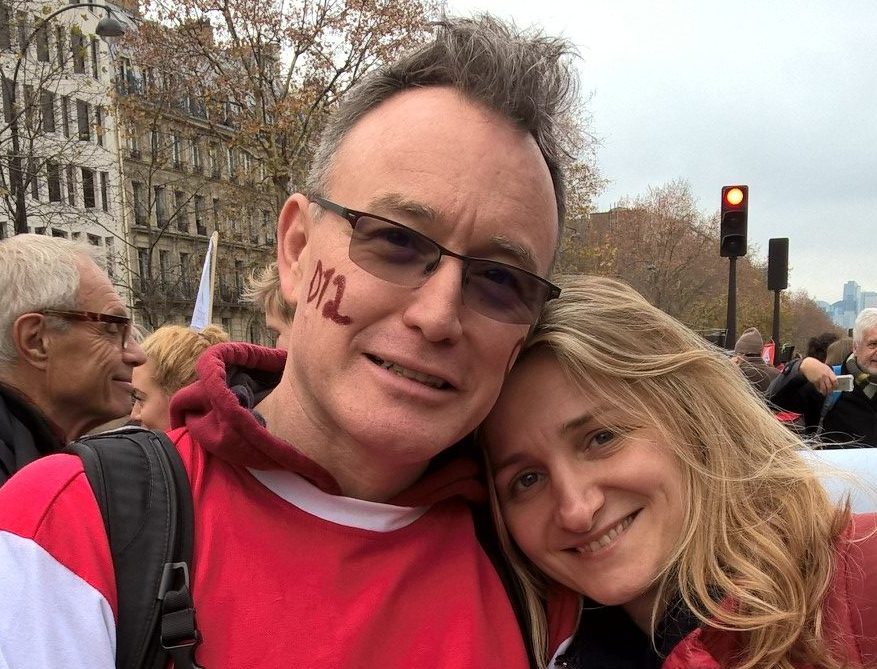 For more than ten years, Alexis, whose work revolves around helping people to reduce their impact on Earth, has been using permaculture as a toolkit to garden his balconies or small corners of London and Paris, and, to a certain extent, to organise his life. But in his heart, he always ached to go to a higher level on his own land.

Blanche, who’s a primary school teacher in a deprived area of Paris, was happy to buy into “the project” although it’s fair to say that she didn’t/doesn’t envisage either living there full-time or turning it into a permaculture teaching centre.

So, what exactly is “the project”? Well, it sort of depends which way you look at it.

Alexis wants to make the house zero carbon and create an edible landscape – a forest garden. Blanche also wants the house to have enough beds and bathrooms to comfortably entertain family and friends. Thus far there’s no disagreement. We’ve given themselves five years to upgrade the house and build the forest garden.

It’s what happens in the long term that is yet to be agreed!

Alexis thinks he might like to use the farm to inspire others and possibly try to earn a living from teaching permaculture, selling fruit and nuts, and renting out eco-cabins. Blanche hasn’t yet countenanced the idea that the farm could be more than a lovely country house for weekends and holidays. The challenge then is to build something we both love and feel fulfilled by without alienating the other’s vision.

Our first and most daunting task was to find the perfect property. We started with an area – The Perche, a regional park halfway between Paris and Nantes – and a series of criteria: accessible from a station by bike, not too far from a boulangerie and a decent restaurant, a traditional building, at least two hectares of land, a stream, no industrial farming in neighbouring fields, no busy roads etc.

Between October 2016 and February 2017, we visited about 20 of the 100 houses Alexis’s mum had found on the internet. A complicated spreadsheet with weighted scores for all our criteria enabled us to select a winner: La Grande Raisandière a small farm sitting on 15 acres in a village delightfully named La Chapelle du Bois, which means the chapel of the wood. 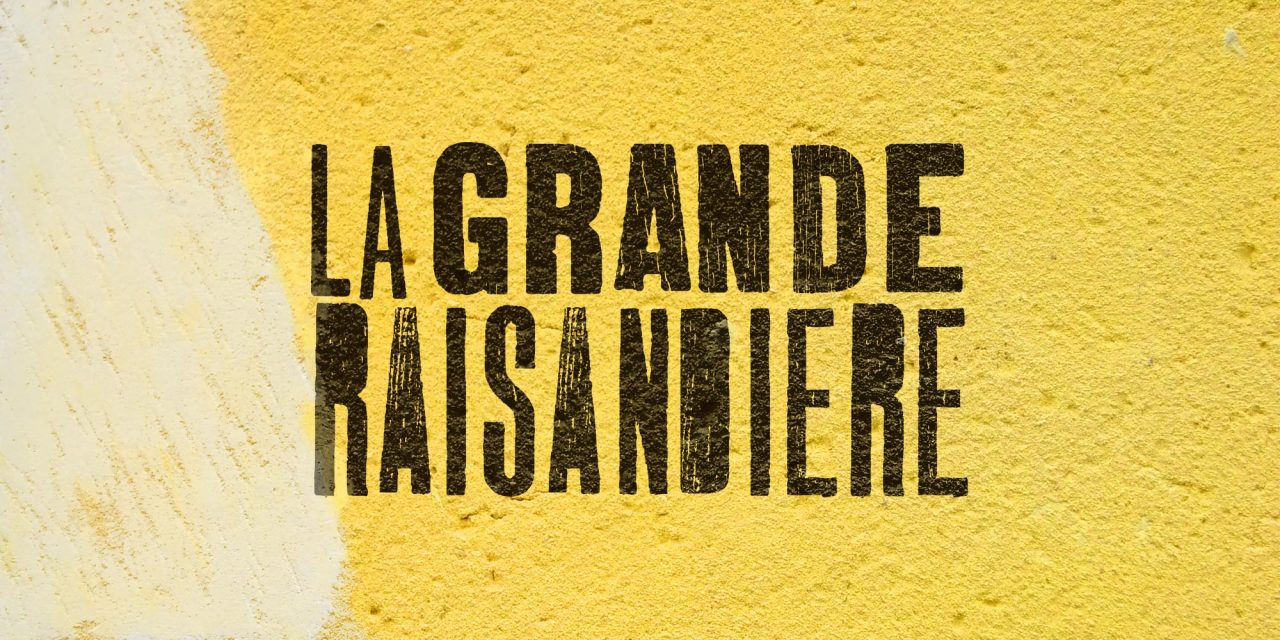 La Grande Raisandiere means absolutely nothing in no language whatsoever and certainly not French. If you type it into the internet, the only thing you will find is our house! The person who sold it to us says it’s been called that since at least 1550. Apparently, there was a Petite Raisandiere once but no longer. These days it’s just us.

Our initial thought was to change the name, not least because it’s devilishly hard to say and spell if you’re not French. But with time we came to like the fact that the farm has been called La Grande Raisandiere for centuries, that it has a unique name and that the name means nothing, or rather, whatever you want it to mean! So, we decided we’d stick with it. After all, French’s foremost permaculture farm, Bec Hellouin up the road in Normandy, also has an unpronounceable name and it seems to work for them!

BUT… after a few weeks of working on this website we changed our minds and decided to go for a French name AND an English one. From now on the farm will be called The Big Raise in English, which is clearly easier for non-French speakers to say, but which also has its roots in the pronunciation of the French original: La Grande RAISE-andière. 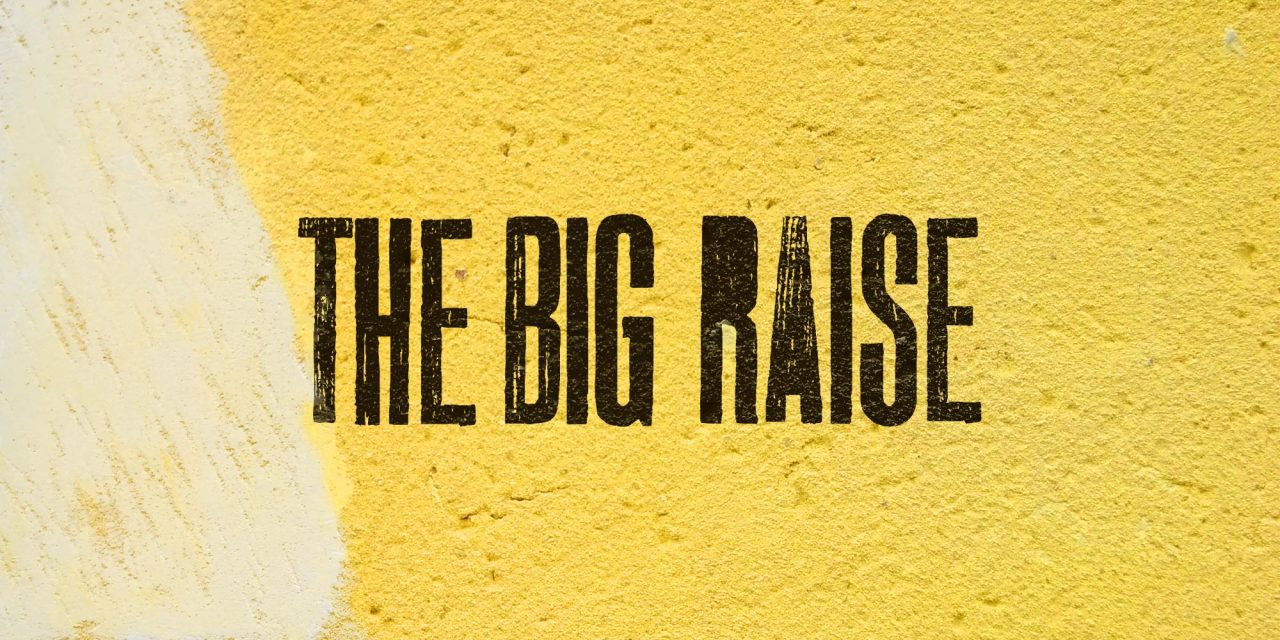 There’s also the sense that the farm is a big step up from farming on balconies in London and Paris. And the idea that, in time, we will hopefully raise the skill levels of anyone who comes to one of our permaculture courses. It also perhaps echos Joanna Macey’s “Great Turning” concept and Alexis de Tocqueville’s “revolution of rising expectations”:

“Nations that have endured patiently and almost unconsciously the most overwhelming oppression, often burst into rebellion against the yoke the moment it begins to grow lighter” (The Old Regime and the Revolution, chapter 16).

Perhaps we can give people a little freedom by inspiring them. Perhaps our farm can be part of the Revolution of Rising Expectations… The Great Turning… The Big Raise!

The main house plus the previous owner’s dogs

Outhouse 1, which is almost prettier than the main house!

The barn – also in traditional stone with yellow render

The Big Raise is a small farm sitting on 15 acres. It has the traditional stone and yellow render buildings of the Perche. There’s a main house, an outhouse that is almost more beautiful than the main house, a barn and a second outhouse that the previous owner used as a chicken coop, and that we intend to turn into our study-bedroom! 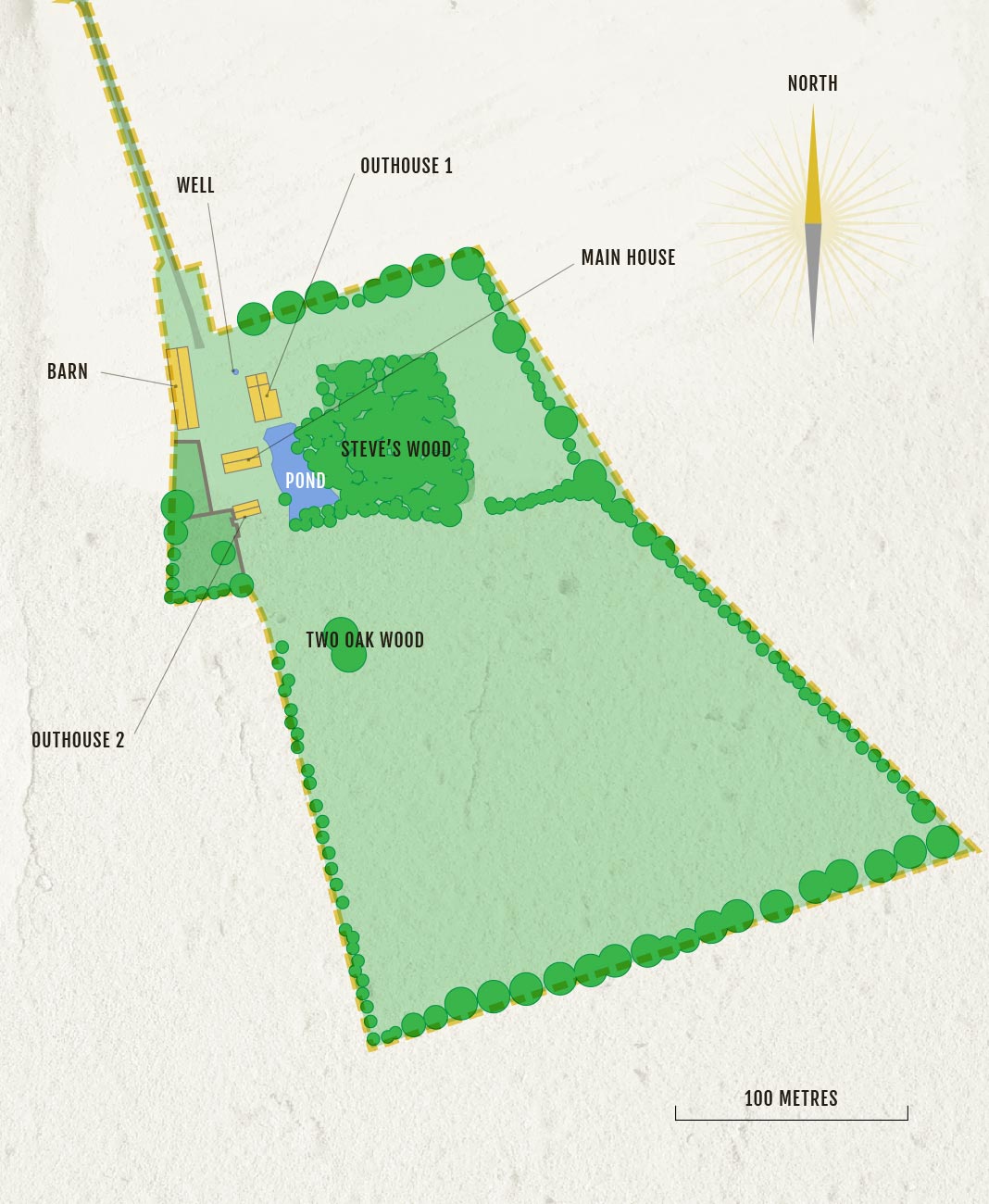 One of the many things that attracted us to this site was that Steve, the seller, developed an interest in permaculture a few years ago and started planting fruit and nut trees, using no dig techniques and covering bare land with straw. All good stuff even if he lacked a design plan. So, we already have fifteen sweet chestnut trees, ten peaches, ten walnuts, two cherries, two apples and one pear.

We have a lot of sweet chestnuts

Blanche puzzles over a tree without leaves

There’s a large pond or a small lake (40m long in autumn, winter and spring) depending on your point of view. And a well that apparently goes down to an underground river. Plus, there’s clay from 70cm to at least 3m60 so if you dig a hole, it automatically fills up with rainwater. 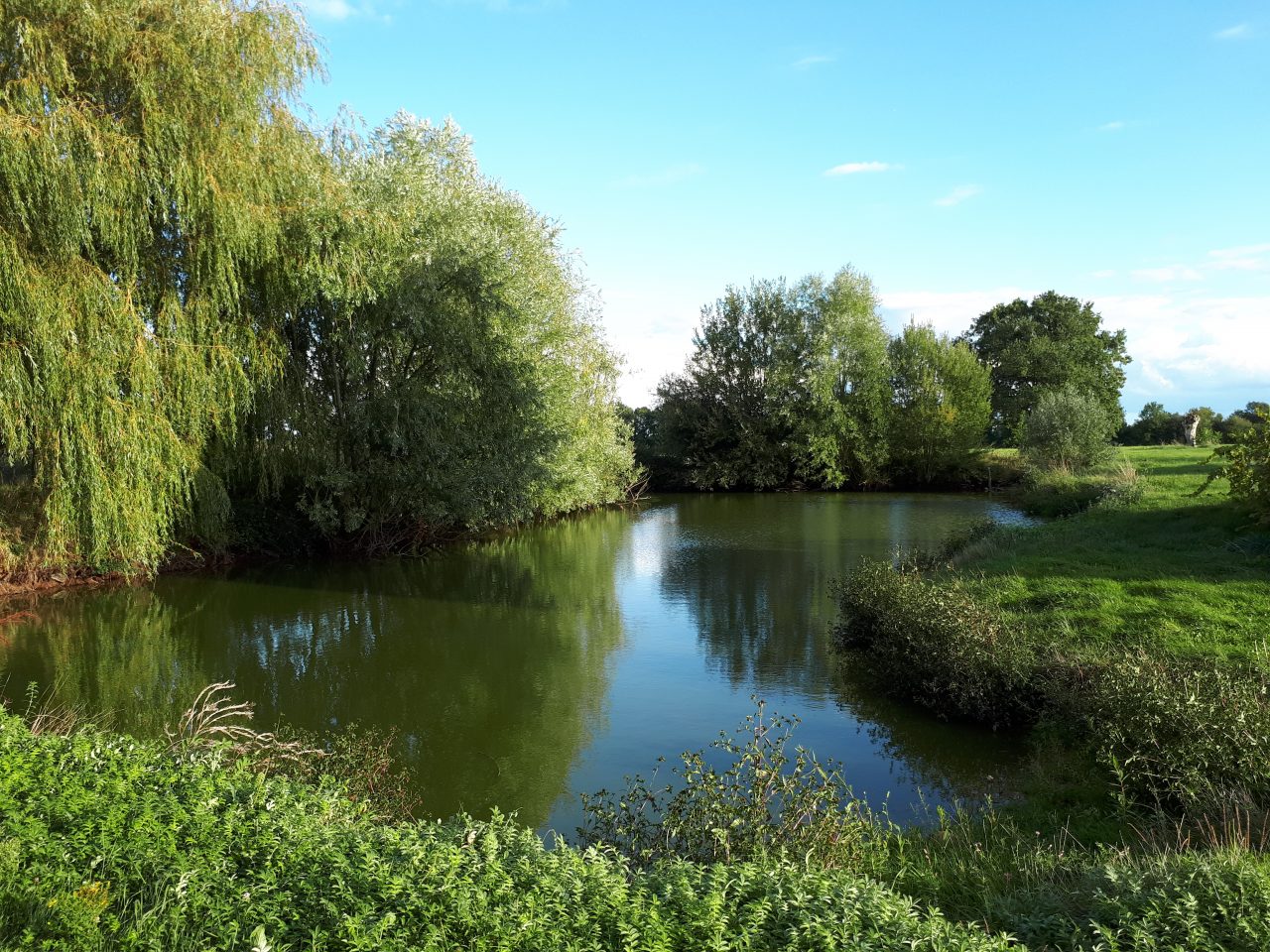 There are at least ten mature and majestic oaks on the farm, and a well-developed traditional hedge of hawthorn, hazel, dog rose, brambles and buckthorn running round most of the property. That’s in stark contrast to most of the surrounding farms where the mature trees and hedges have been short-sightedly chopped down to create bigger fields.

We’re a short distance by bike (12 mins for Alexis, 15 mins for Blanche) to La Ferté Bernard, our nearest town and station, and from there it’s 1 hour 50 mins to Paris by train. There’s a bakery in our village and there’s a decent restaurant in La Ferté Bernard with a chef who’s willing to contemplate vegetarian food (no mean feat in rural France!).

In short, it’s perfect! Over the coming weeks, months and years, we will endeavour to chronicle our story as it unfolds. The ending has yet to be written but then so have all the chapters!