So far we’ve mostly talked about steps forward, but we think it’s also important to record the steps back, so here are a few of our biggest cock-ups!

How our pond became a huge liquid fertiliser tank

A few weeks ago our region was subjected to the most incredible rainfall in a short period. Our neighbours’ house and garden was surrounded by 30cm of water! Our pond overflowed into the front yard. Climate change? What climate change? 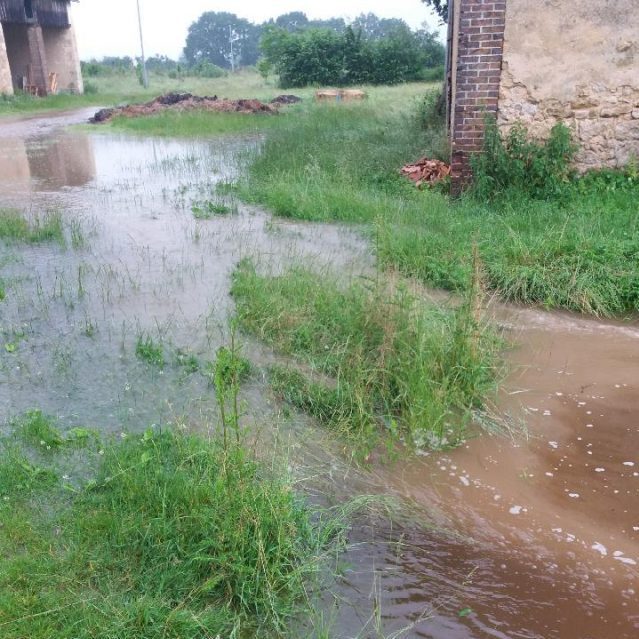 The pond overflowing into the courtyard in front of our house

Anyway, the water level of the pond went down pretty quickly and luckily our house wasn’t touched because it’s on slightly raised ground, but, as you may remember from previous newsletters, we tend to have a big pile of manure in the front yard. As a result, rivers of liquid manure made their way to the pond and it turned a lovely shade of deep brown. We  retested the water quality and lo and behold found traces of coliform bacteria (faeces). Basically our pond has become a huge reservoir of liquid fertiliser! So that’s a bit shit, as it were. Great for the plants, but not so great for swimming!

Mind you, it hasn’t stopped Mao drinking the pond water. In fact, she seems to prefer liquid fertiliser to the expensively filtered water we put in her bowl! 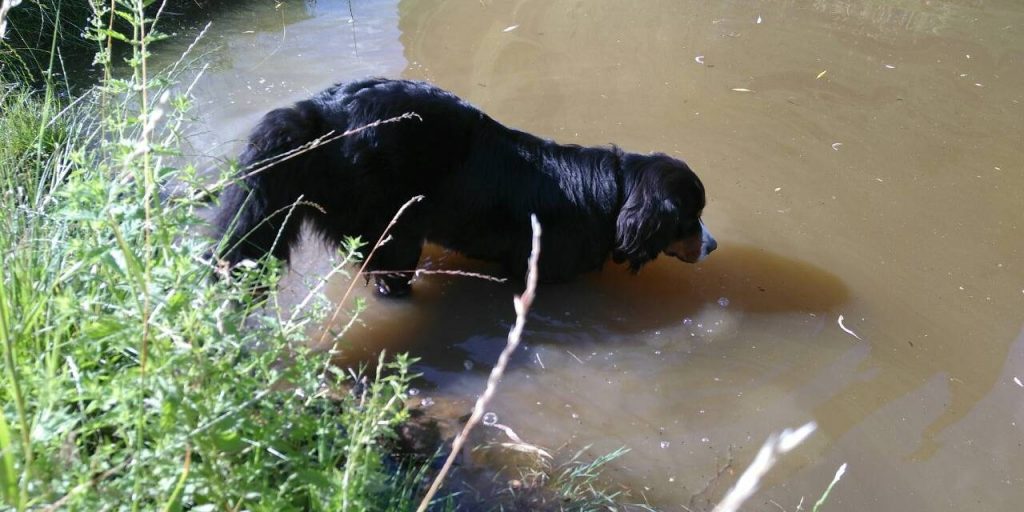 How can Mao prefer pond water to filtered water?

There’s no accounting for taste!!!

Lesson: don’t store manure next to your swimming pond!

As per our earlier post on the pond refurbishment, we planned to plant oxygenating plants to filter the water. 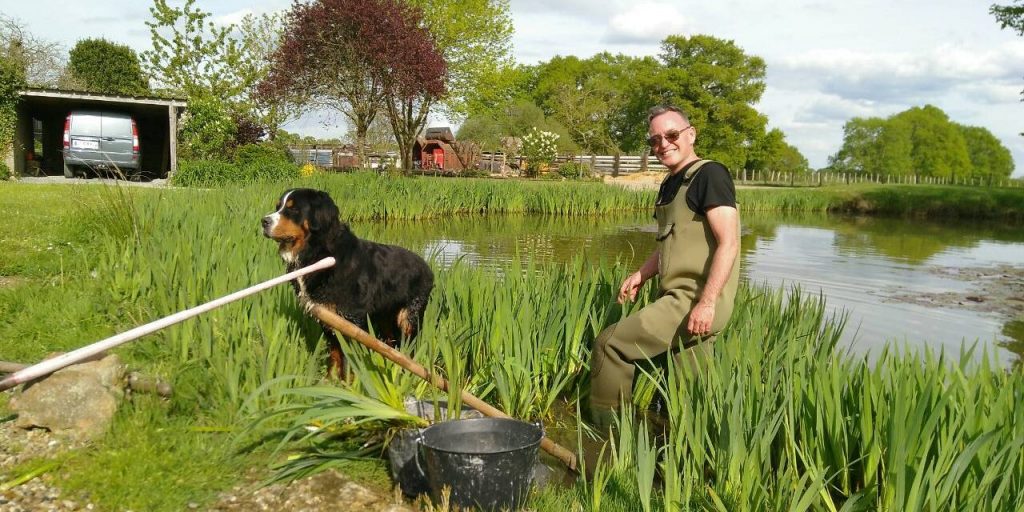 Alexis and Mao raiding the neighbours’ pond for oxygenating irises

But our three water rats ate the irises Alexis planted. Lock, stalk and barrel. So, with the help of our neighbour, Louis, once he’d been convinced not to turn them into paté, we decided to move them to another pond, a few kms away. The DAY we talked about getting a trap to catch them, they disappeared. Completely. Weird or what?

It turned out they’re still here but have become much more surreptitious. Maybe one of them got lifted by the buzzard that circles our field sometimes. Who knows? When our neighbour’s dog, Rebel, ate two of them in quick succession, that didn’t make the remaining three go all furtive on us. 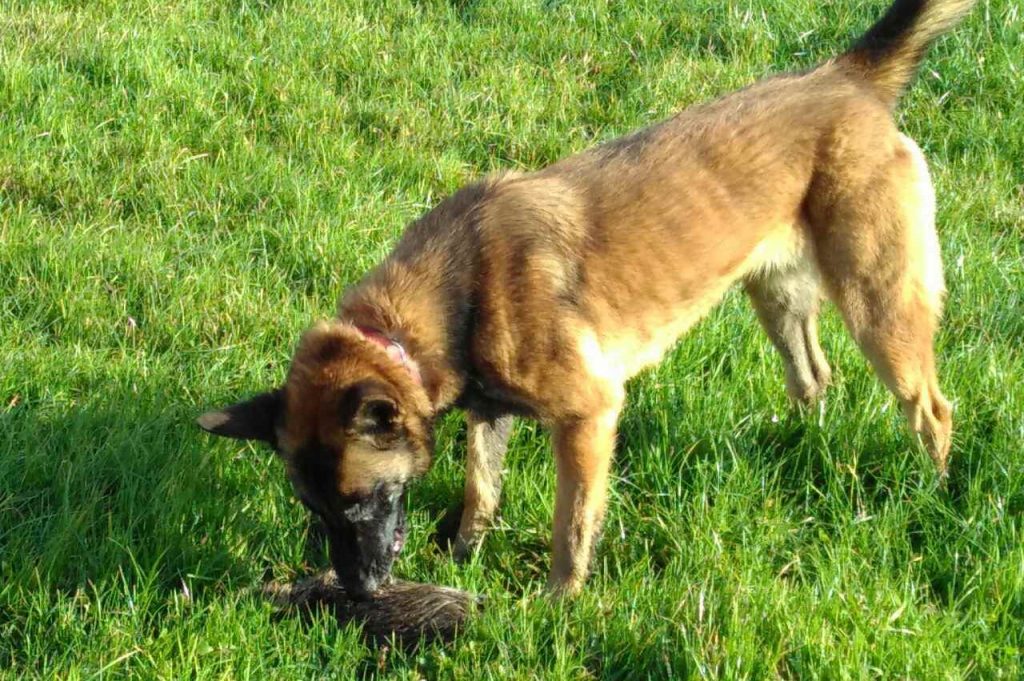 Whatever! They’re still there so we’ve now got a [very humane] trap and, with the help of apples and carrots, we’re planning to trap them and move them. But it hasn’t worked so far. They’re now much too clever and cautious to be duped into walking into a cage for a bit of mouldy old apple.


If only someone had warned us how much water the 19th century tiles and the render in the new wall between the kitchen and the living room were going to bring into the house. Basically each tile was soaked with water before it was laid. And the render in the wall was wet. Plus we’d taken out the radiators and it was the wettest winter in 50 years so we couldn’t open the windows. The result was mould on the walls and, most critically, on our new wooden front door and front window. 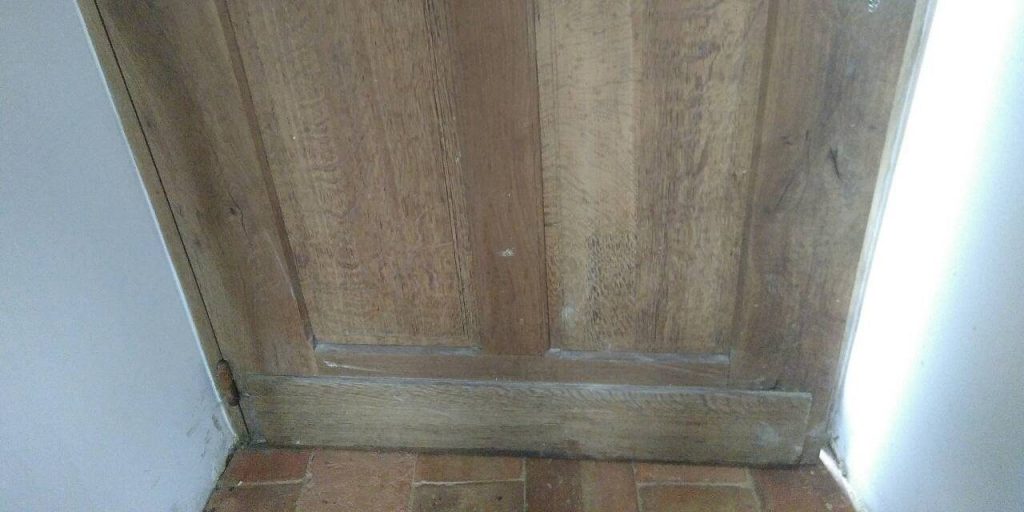 This traditional woodwork was crafted by the winner of France’s prestigious Best Worker award (Meilleur Ouvrier de France). But we nearly lost those works of art. And even now, after treating and cleaning them, they don’t look anything like as good as they did.

Lesson: ventilate and heat if you’re doing building work inside an old house in winter.

We were very proud of our HeatSava single room heat recovery units when they were installed. As you may recall from this post on our energy strategy, they remove stale, smelly, humid air, replace it with fresh air from outside and warm the fresh air with the heat from the old air. Genius. If only we’d had them when the tomettes were installed.

But there’s another problem – the HeatSava units are designed to work for a variety of wall depths up to 600mm. But our house is a) very old and b) very insulated. So 600mm wasn’t long enough. The outflow/inflow was sitting inside the wall. Not ideal. Actually completely useless. So we had to get our builder to put in stone insets so that the inflow/outflow could function properly.

Lesson: don’t buy HeatSavas if your walls are deeper than 600mm. 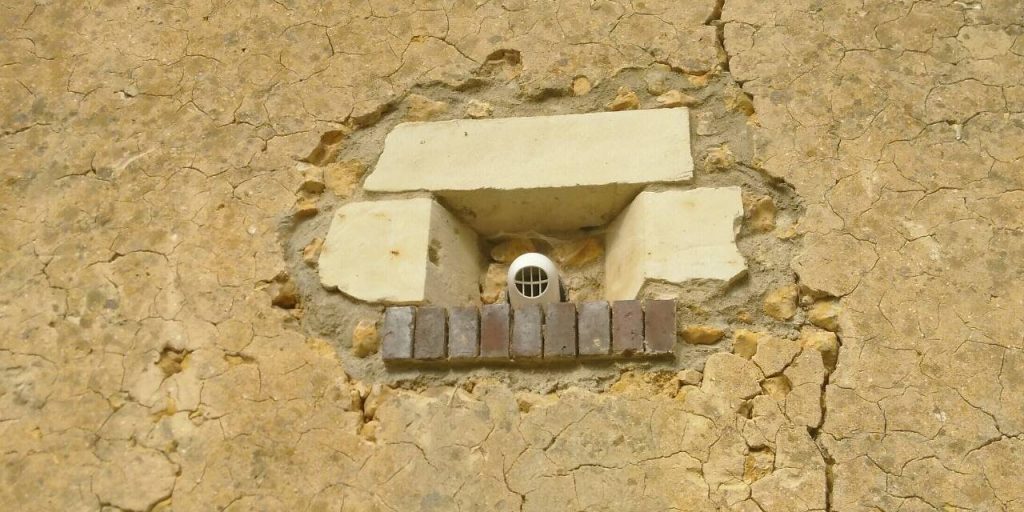 Redoing the external wall to cope with the air intake/outtake cost an arm and a leg, but then the builder decided to take a design decision without reference to us. He copied the outhouse and put brick into the outside wall. There is no brick on our house. The outhouse was built some 50 years later and is a very different style. So now he’s going to have to replace it and put traditional stone in.

Lesson: you simply have to be there when builders are working on your house in case they take a critical decision without telling you.


Alexis happened to notice some workmen in our drive a couple of weeks. They were on a cherry picker up at the level of the aerial telephone line. It turned out they were installing fibre optic cable 50cm above the telephone line – despite us saying months ago that we wanted it to pay to install it in the ground. So they were stopped and our builder got to work, at very short notice, digging a trench from the main gate 250m to the front door, and filling it with 40mm cable runs as decreed by the cable installation company.

But come the day for the cable to be installed, the subcontractor couldn’t get the cable through the trunking. Three of them. A whole day. No way.

When we told our electrician that we were putting in 40mm flexible trunking for the cable, the telephone (if it doesn’t get scrapped now we have cable but that’s another story) and an electricity line in case we want to control the front gate from the house, he said “don’t do it – it’s really tough to get a line through it over long distances. You need bigger diameter rigid plastic tubing.”

“No worries,” we said. “The cable installer presumably knows what he’s doing.” Yeah right. This one took weeks to resolve, cost loadsamoney and needed more holes to be dug in the drive.

Lesson: listen to your electrician if you’re installing electric cables. 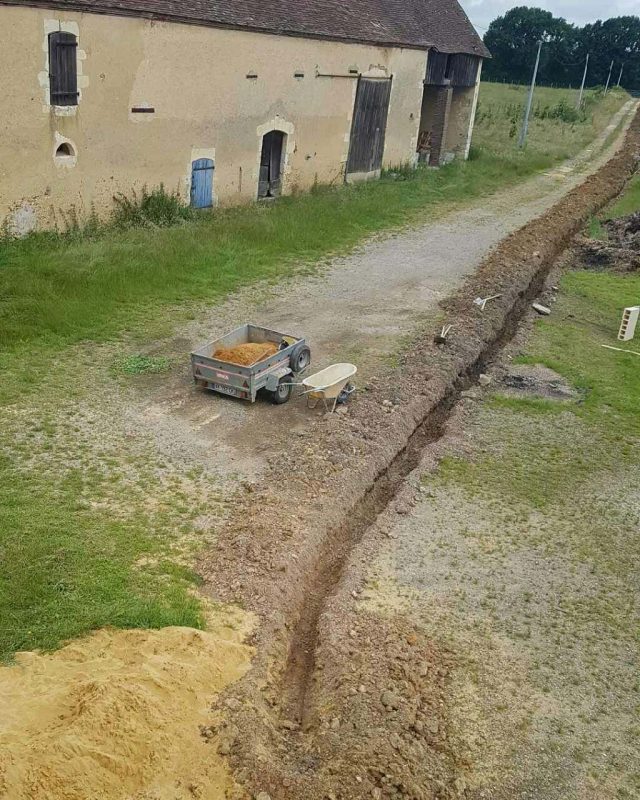 Digging up the drive a few weeks before Blanche’s 40th birthday party!

In the shit again!

Our house isn’t connected to the sewers. We have a septic tank in our garden. It’s actually under the orchard so there’s a pump under the garden to push the dirty water 100m further down the line. The septic tank was emptied just before we bought the house and the pump was replaced a couple of years ago. All well and good, until the day we invited Blanche’s family and some of her friends to celebrate her 40th birthday and the intermediate tank under the garden started overflowing…

“What’s the water rising in the garden,” asked one guest innocently. “What’s the smell,” we asked each other anxiously? It turned out that there was no electricity supply from the house to the pump. We had to move all the guests (and their tables, chairs, food and drinks) to the other side of the house and temporarily ban the use of water (toilets, taps, showers). Eek!

Fortunately we have compost loos (about which much more in another poo post)  otherwise we’d really have been up shit creek without any toilet flush. As it was it took Super Steve (the former owner) and our wonderful neighbour Gilles (the organic cow farmer) two hours to create a bypass solution and get the pump working again. 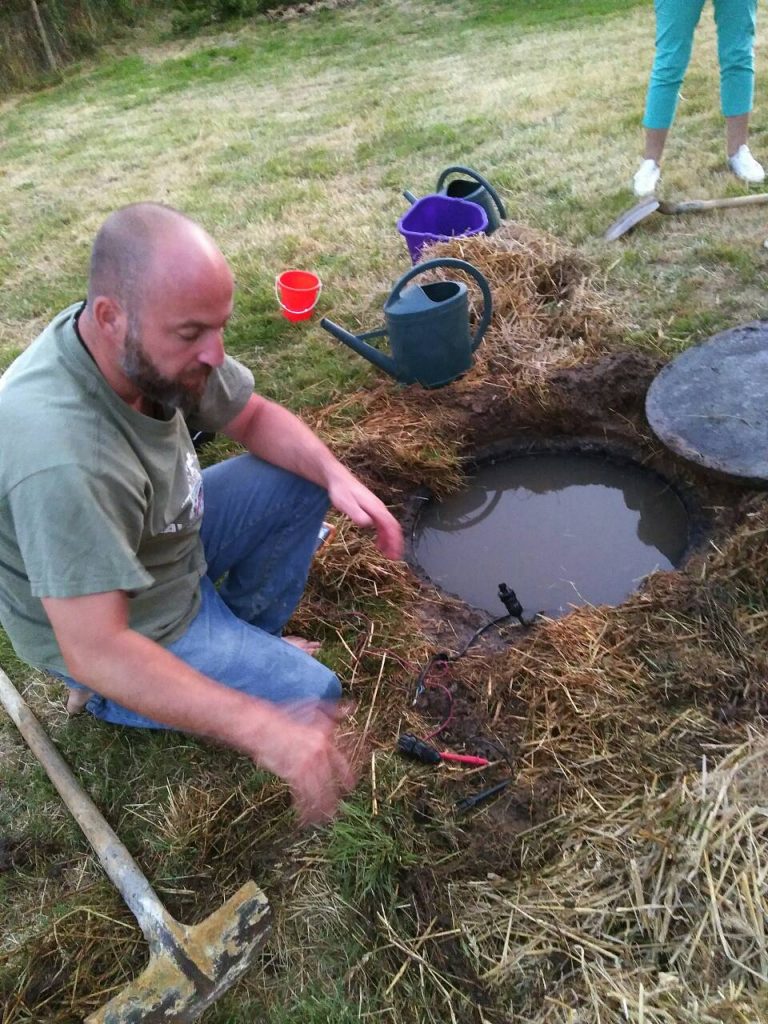 An extremely well-oiled Steve attempting to fix our pump by mixing bare wires and smelly water!

Two days later Alexis ran into our electrician in the village and mentioned the incident. Did he know where the fuse for the pump was on the fuse board because we couldn’t find it? “What pump?” was his magnificent response. It turns out he cut the line because he didn’t know it was there when he renewed the electricity network in our house six months ago and the intermediate tank under the garden had been filling up ever since. When Blanche’s family and friends started putting pressure on the system, well, the shit hit the fan, as it were!

Lesson: find out what electrical appliances come as part of the house when you buy it and, if you redo the electrics, tell your electrician where the sewer pump is!