More mistakes to savour and a bumper harvest

We’ve spent a lot of time this summer trying to correct a big mistake from last autumn’s clean-out of the pond. Some of you may remember that the mud from the pond was spread around the field. 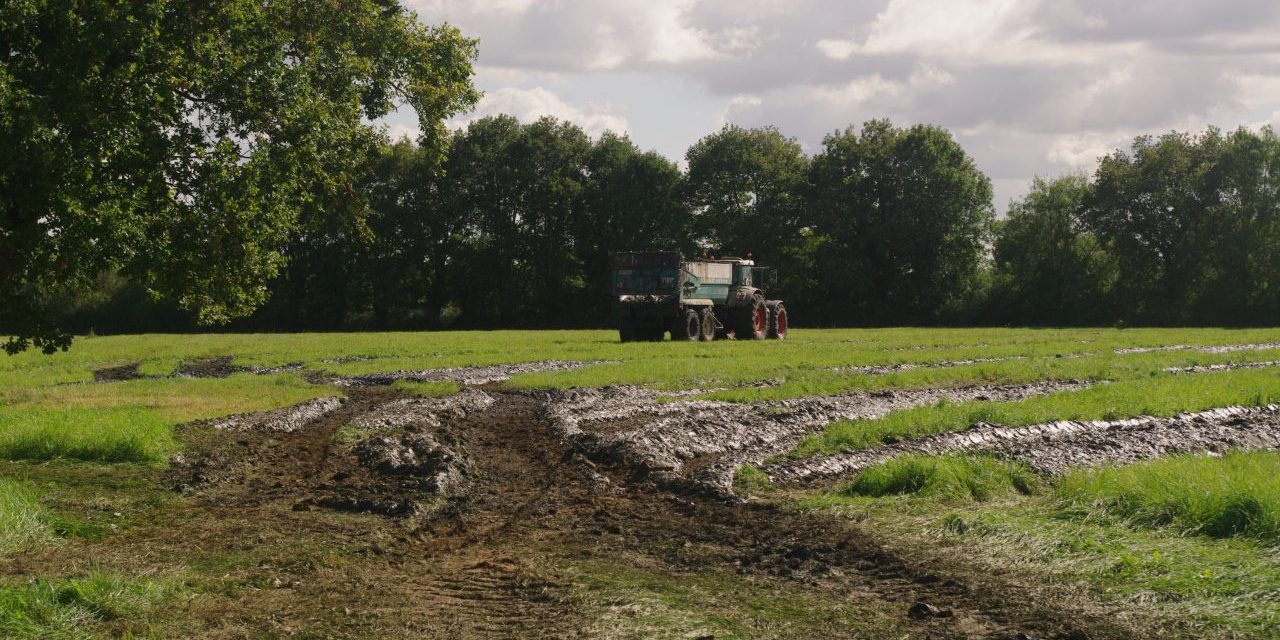 Spreading the shit around the field last autumn

Except that it wasn’t exactly spread around the field: it was left in mounds which turned out to contain logs, rocks, iron bars and a fair amount of plastic. Laurent, the farmer who mows the field, found out the hard way and nearly damaged his tractor blades. So, we now have to identify every mound of mud, scythe the grass around it, remove any buried obstacles and spread the mud. 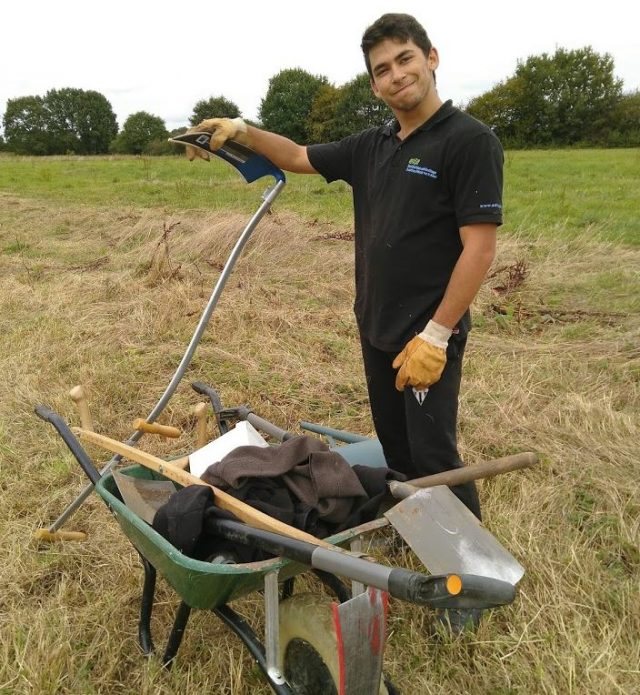 Floran, a student who spent a week working on the farm in September

It’s a laborious task (although great for your physique!), but if we don’t do it, then the farmer will only cut 1/3 of the field and we’ll have to scythe the remaining 2/3 (10 acres!). Also, he won’t get so much hay, so we won’t get so much wood for winter in exchange for the hay. Anyone fancy a few days working in our field?!

Our changing relationship with animals

When we arrived a little over a year ago, we were shocked by the relationship country folk have with animals, which can basically be summed up as use ‘em or abuse ‘em!

Deer, wild boar, pheasants, rabbits, a heron, water hens and goodness knows what else all find sanctuary from hunters on our land. And our neighbour’s dog, Rebelle, now gets regular walks around our land and spends a fair amount of time out of her cage. 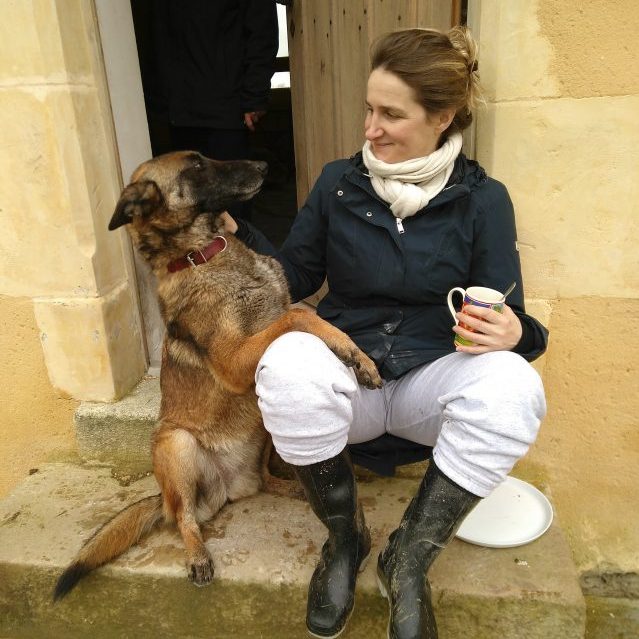 Blanche and Rebelle – a meeting of minds!

However, after a year of pigeons in the barn defecating on our heads, water rats in the pond eating our oxygenating plants and now mice in the house eating their way through our drawers, we’re starting to rethink things a little.

Operation Pigeon, to clear the colony of 35-40 pigeons out of the barn, began earlier this month. A roofer closed all the holes in the barn, our neighbour Louis blasted his shotgun into the earth a few times – that got rid of 30+ pigeons. But 4-5 refused to leave. Even Louis’s patented pigeon trap failed to convince them. 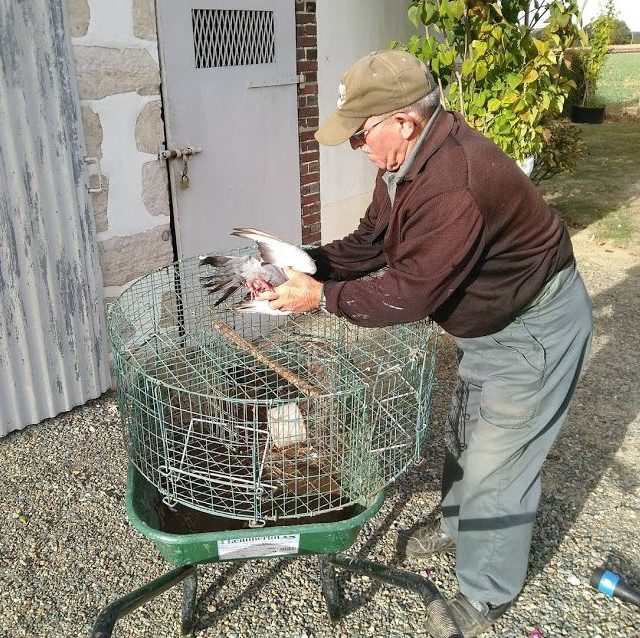 So we left them there for a few days to think about things, then opened the door. Two flew out. Three days later we opened the door again and the last pigeons flew the coop. Ah! Now we can start using the barn without feeling a warm sticky feeling on our heads!

The water rats seem to have disappeared. They became more furtive the day we talked of buying a water rat trap! And have now gone altogether. Presumably they’ve found a nicer pond somewhere. Or maybe they got eaten by the buzzard that circles our land. [Stop press 8 October 2018: one of the water rats is back!]

As for the mice, who decided that a great place to poo was in our bed under the duvet, for the moment we’ve put all the food in jars and tupperware, and when we’re not around we plug in an ultrasound device which isn’t supposed to be their favourite music. But we’re not sure that will be enough. We’re resisting the idea of putting poison down for the moment, but now that we live in the middle of a field our relationship with animals is changing a little! [Stop press 8 October 2018: we’re thinking of getting a couple of cats!]

No rain today. Or tomorrow.

Following on from the wettest winter in 50 years, it rained just four times this summer! Once in June (when the pond overflowed!), once in July, once in August and once in September. [Stop press 8 October 2018: And once, so far, in October, with no more rain forecast for the foreseeable future!]  The land is like concrete. The pond level is down by about 80cm. (But we still have lots of water because of last year’s cleanout. And yes, the water is clean again following on from the horse manure debacle!). 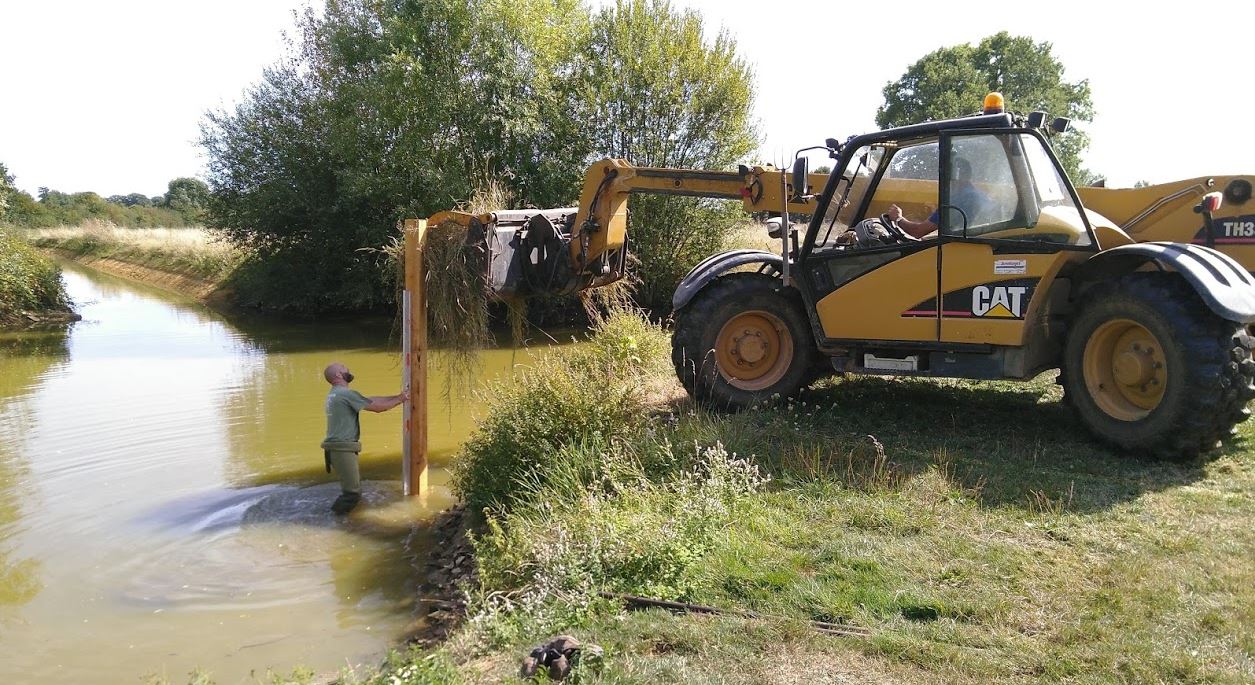 The 125 trees we planted in the new southwest hedge nearly died of thirst having nearly been strangled at birth by nettles, thistles and brambles. We use a lot of straw to protect the ground from the sun and to retain humidity. But still. If this is what’s going to be like, then we need a lot more rainwater harvesting i.e. more ponds (probably one per hectare) and we need a portable solar water pump. Looks like the Swiss have one. Do we have any Swiss friends who want to buy us one for Xmas? ?

Despite the lack of rain, we’ve had fantastic harvests of raspberries, beans, peaches, pears, courgettes, tomatoes, redcurrants, grapes, coriander, sage and strawberries. In fact, only our apple crop was a failure. 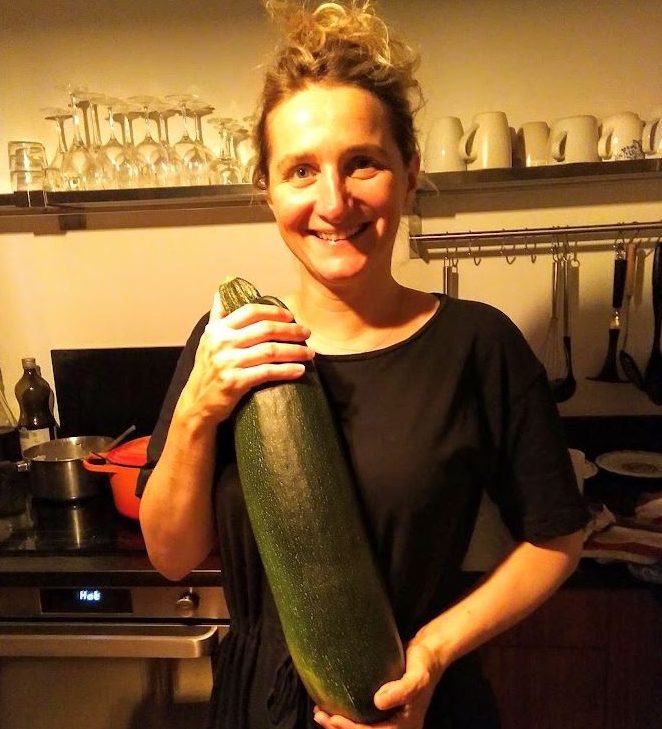 Our first courgette put an enormous smile on Blanche’s face!

We have raspberries non-stop from April until November. It looks like our tomato plants will still be producing in October. Likewise, the magic bean wigwam. 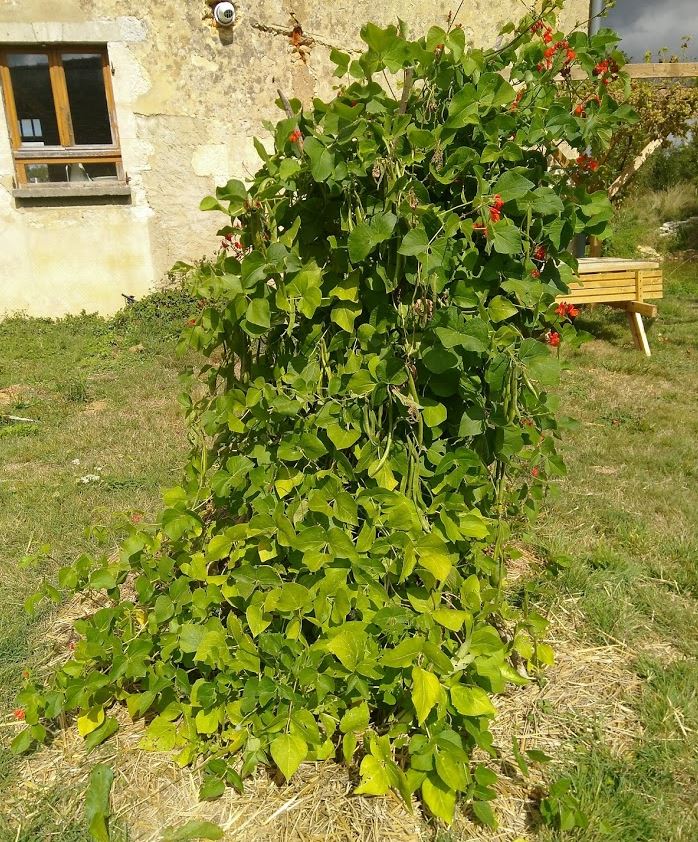 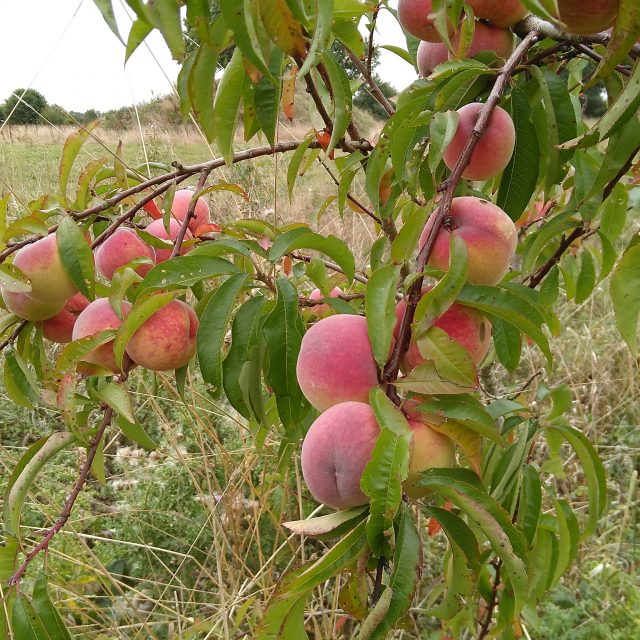 One of our 15 peach trees

Fortunately we managed to bottle a lot of them and other fruit and vegetables too. 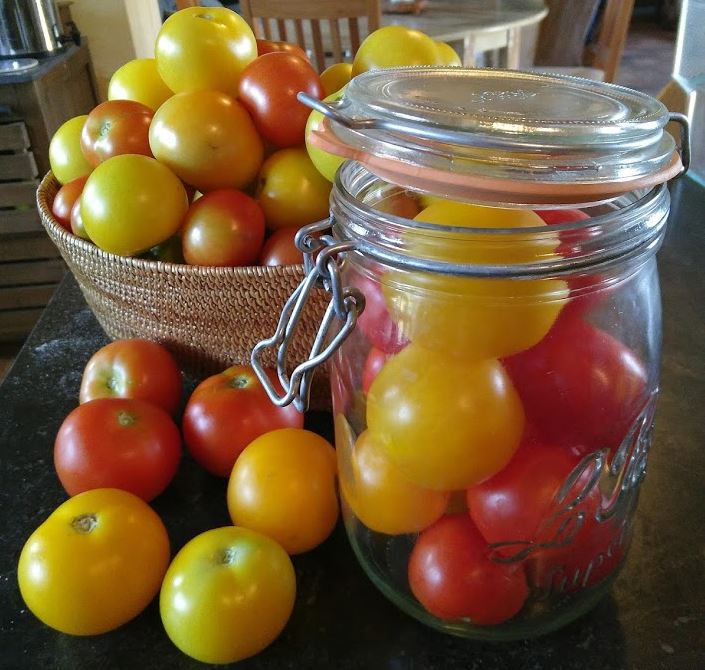 Bottling tomatoes for the winter

Our first kakis (persimmons) are on the branch but we have no pawpaw fruit so far! Kakis and pawpaw in France! Who knew? 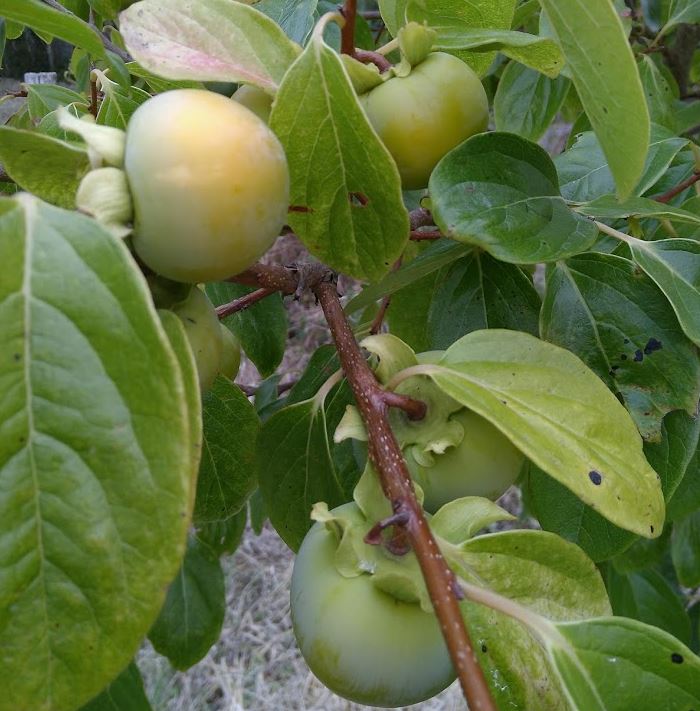 One of our kaki trees

We estimate that about 140 people visited the farm this summer (which explains why it’s been so long since our last newsletter!). 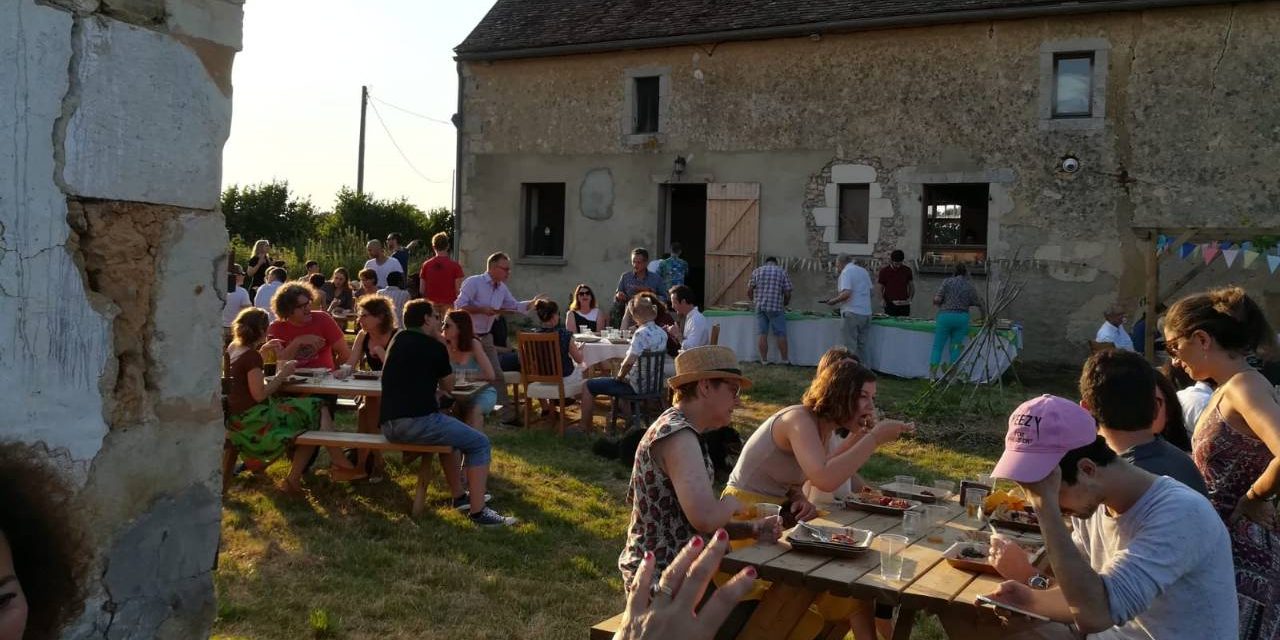 Guests at Blanche’s 40th enjoying a vegan buffet. The photo was taken before the septic tank started overflowing into the garden under the feet of the table in the middle!

Put another way we had just three days on our own! That’s fantastic in terms of showing people our wonderful farm, but it can also be quite tiring. So, and this is a big and unexpected learning, next year we’re going to pencil a few more days off!